It’s been suggested that John Porter looked too good to be an SAS soldier turned agent for MI6. And they are probably right. However, this does not stop me from loving how he rocks his various outfits and disguises. For example, John Porter with that gazelle-like neck of his looks swell with it swathed in a scarf.

And when he wraps it around his head, h 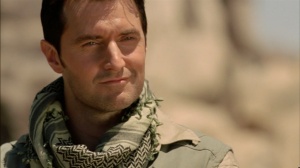 iding everything but his eyes, he looks like the masculine equivalent of a harem girl. All we can see are those those eyes–keen, intense, beautiful. You just long to know what else is under the fabric.

So here’s to you, Portah. Brave, heroic, resourceful, dangerous–and a guy who looks swell in scarves. (Screencaps courtesy of RANet and Richard Armitage Central Gallery.) 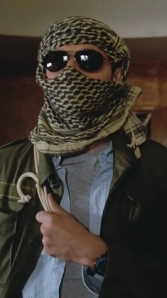 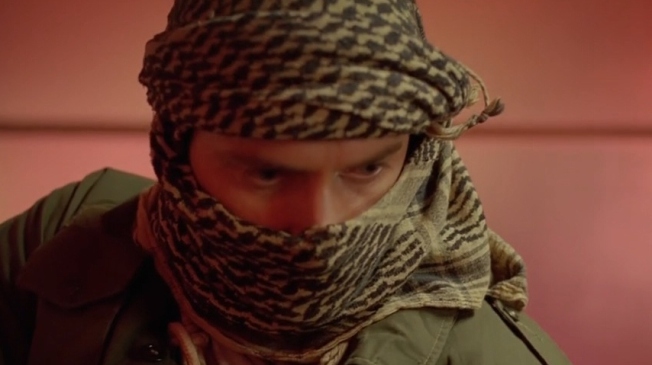 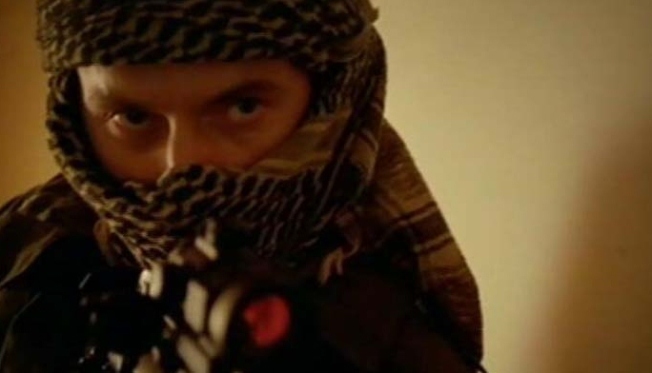 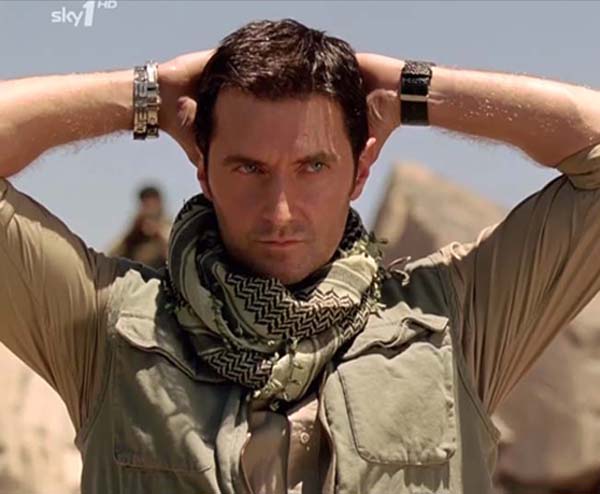 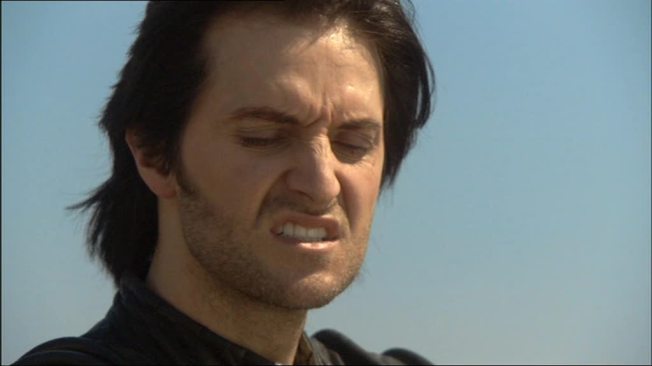 Ewwwww! There is something rotten--downright mephitic--in the shire of Nottingham! 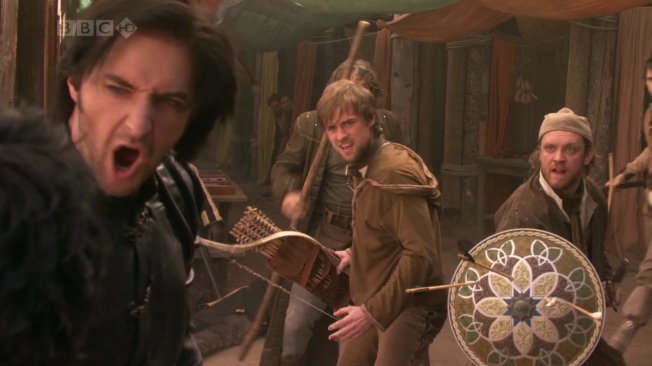 God's tears! Hood, you and your fellow forest boys are so ripe, you are mephitic!

Our word for the day is mephitic. Mephitic: (adjective) poisonous; foul-smelling.

Robin Hood will help us illustrate today’s word. I think we could safely say the Treacherous Troll (aka Vasey) had a mephitic influence on Sir Guy. After all, Guy himself said Vasey poisoned everything.

And I am quite sure Forest Boy and his gang smelled pretty darned mephitic as I never saw any bathtubs or showers in their camps–just the medieval garage door opener.

Sir Guy, on the other hand, changed his tunics routinely and no doubt enjoyed bathing and having Robin’s servants rub his feet. I am certain he did his best to avoid becoming mephitic in his unceasing efforts to win Marian (ungrateful cow).

However, after the Episode Which Dare Not Speak Its Name at the eod of S2, Guy’s grooming skills were distinctly lacking. One suspects between the greasy hair, unwashed body, dirty garments and smell of alcohol, early S3 Guy was quite mephitic (thank goodness for Prince John’s Red Door Salon and Spa).
However, it should be noted that Greasy Madman Guy still managed to retain his sexiness. When you got it, you got it, baby.

Here are three fanvids featuring Harry and/or John S set to an uptempo Peggy Lee song, a poignant number by Adele and an Elton John classic covered by Ellie Gould. Hope you enjoy! 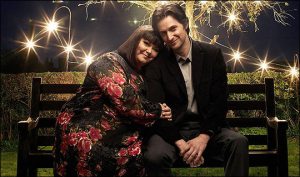 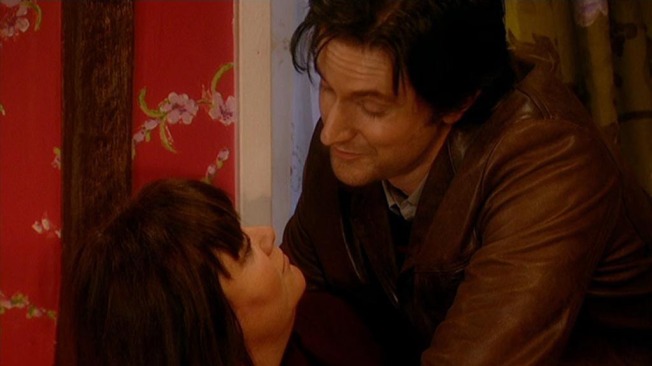 Harry and Gerri prepare for That Kiss--right this second. 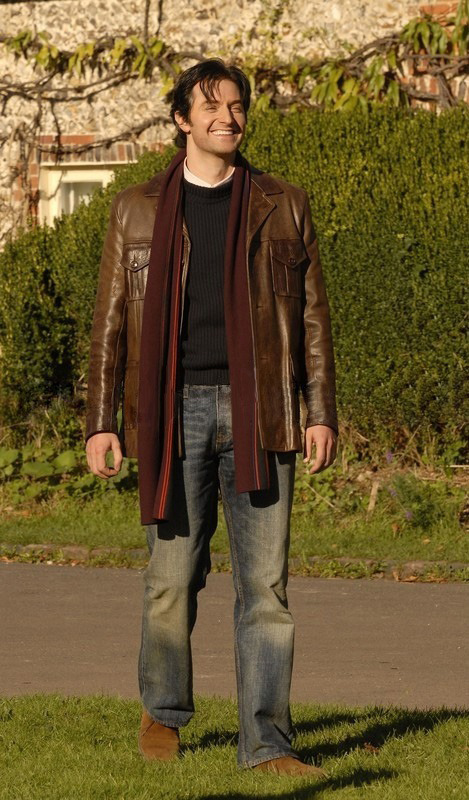 A tall drink of sweet, sexy water. KInd of like his Creator. 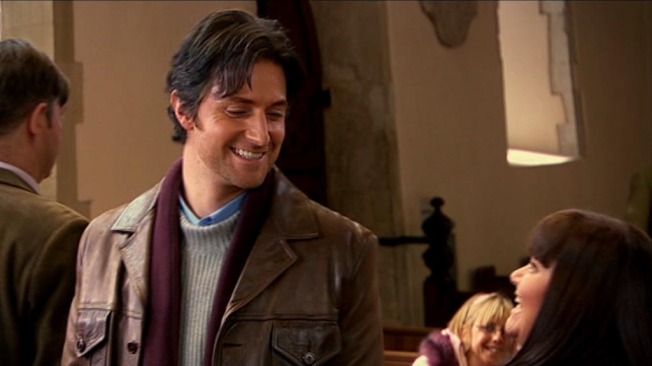 And that sunny, sweet smile! 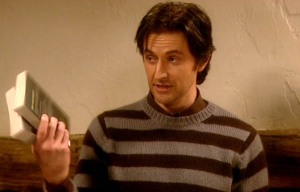 He loves good books and quotes from Thomas Hardy. I love a man with beauty AND brains.

Good-humored, bookish, sweet, a bit shy, well-mannered, great with numbers. A smile like sunshine. Dark hair that flops endearingly across his brow. His tastes in wooly jumpers may be a bit dodgy, but it doesn’t take away from his adorableness. And those long, long legs in those jeans . . . and kisses. With tongues. The apparent patience to put up with the daft citizens of Dibley in order to share his life with the vicar he adores.
And he’s the character Richard says most resembles his own personality in real life. How can you not love Harry Jasper Kennedy?