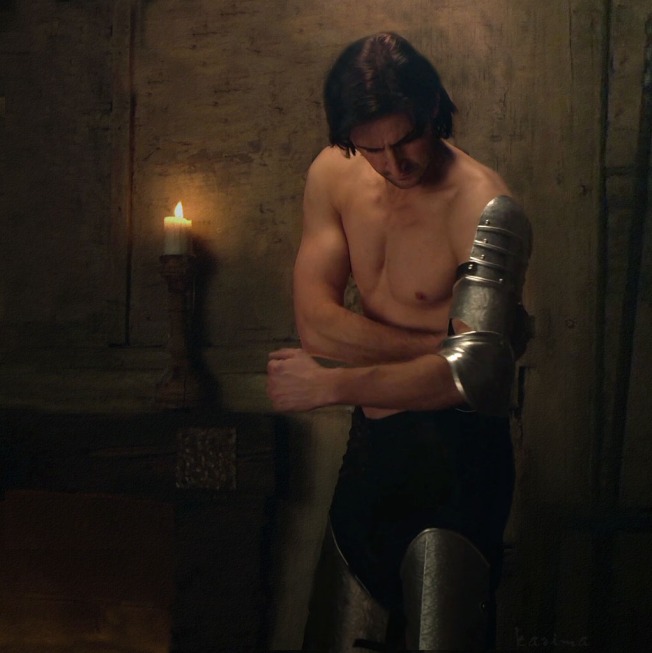 This wonderful photo manipulation by the talented Karima has been posted at a couple of places recently, and I think I have featured it amongst several other photos. However, I think it deserves a post all its own. Karima has done some other wonderful manips featuring the ever-delectable Sir Guy, but this just might be my favorite.

I love its painterly quality, how Sir Guy’s flesh seems to glow, burnished by the firelight; the silver gleam of his armor, and the glossy sheen of his dark hair. 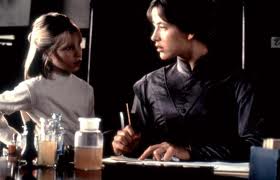 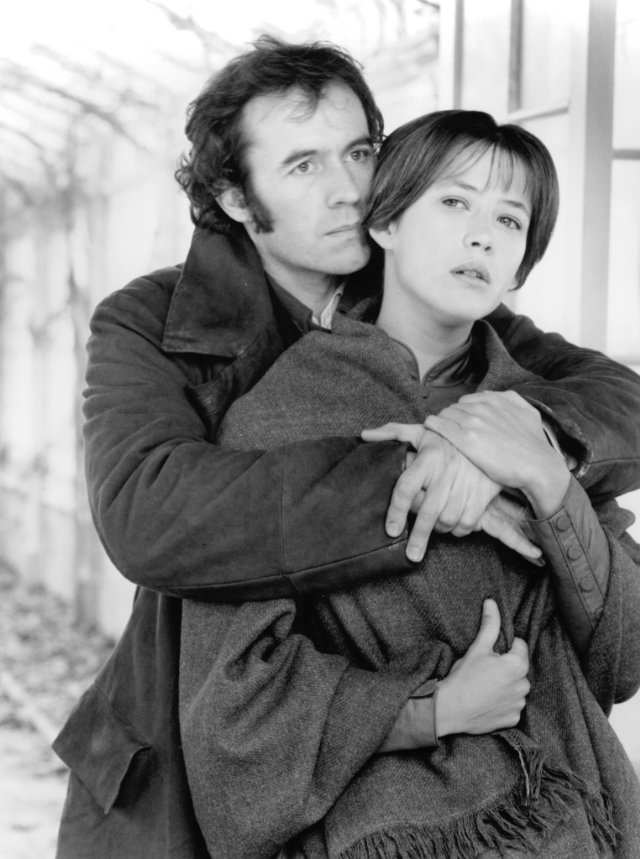 Stephen Dillane and Sophie Marceau are the stars of the period drama "Firelight."

I happened across this movie one weekend on TV a few years ago and fell in love with it. Made in 1997, it is not a particularly well-known film, but it is one I believe deserves a broader audience. If you love a well-acted period drama that is moving and achingly romantic at times, Firelight just might be the movie for you.

The film opens in 1838. A young Swiss governess, Elisabeth, who is trying to help her father out of his mounting debts, agrees to bear a child for an anonymous member of the English gentry. A tragic accident has prevented his wife from being capable of bearing him a child.

The two meet for three nights at an island hotel. It is meant to be a business transaction, a sort of surrogate motherhood with no attachment developing between the partners. The Englishman will pay off her father’s debts. Any child conceived will be surrendered to the father at birth.

However, things do not go as planned. Elisabeth and the Engishman are surprised to find themselves drawn to one another as they make love by firelight, developing a deep attachment as they converse at the hotel and during walks on the beach. Afterwards, they return to their normal lives.

Nine months later, Elisabeth gives birth to a daughter, and while she gives the baby away as promised to the Englishman, she never forgets her. Elisabeth begans keeping a journal filled with watercolor paintings of flowers and plants, making a new page for each holiday and birthday they are apart.

When the little girl turns seven, Elisabeth, heartsick for her child, decides she must see her daughter and manages to track her down. She is hired as the child’s governess by the Englishman’s sister-in-law. Constance. Her daughter has a loving relationship with her father, Charles, but is a willful, arrogant, spoiled child who has never been disciplined properly–and it shows.

In spite of neither Charles or the little girl wanting her there, Constance insists the governess be given one month at her post to give her time to look for another situation . . .

There is a story that Elisabeth shares with Louisa which becomes integral to the plot:

It’s a kind of magic. Firelight makes time stand still. When you put out the lamps and sit in the firelight’s glow there aren’t any rules any more. You can do what you want, say what you want, be what you want, and when the lamps are lit again, time starts again, and everything you said or did is forgotten. More than forgotten it never happened.

For those who have not seen the film, I do not want to say much more about the plot.

The love of a mother for a child who does not know their true relationship, the attraction between two people who are forbidden to share their feelings and the determination to tame a willful heart for its own good are all part of this engrossing story.

Sophie Marceau is incandescent as Elisabeth, her beautiful and expressive face sometimes speaking volumes without saying a word; Stephen Dillane is equally impressive as Charles, a country gentleman struggling to maintain his property in the face of a profligate father while at the same time dealing with a catatonic wife.

I purchased Firelight on DVD through Amazon’s Marketplace and I consider it a welcome addition to my period drama/romance collection. (The film is rated R for some brief nudity and sexual content). 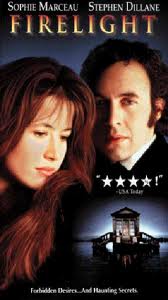 When the subject of RA’s hair came up on another blog entry (specifically, what is his natural color?), it popped into my mind that perhaps I should add a post featuring some of the many shades of Armitage, from medium brown, to dark brown to black. Which is your favorite, or do you find him equally dishy no matter what the hue of his hair? Do tell. 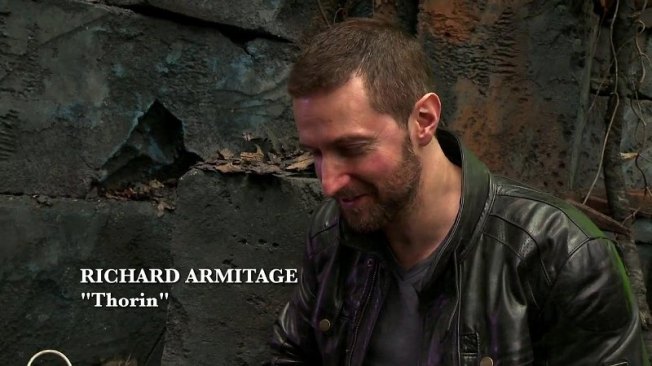 Is this Richard's natural color these days? The little flecks of gray are endearing to me. 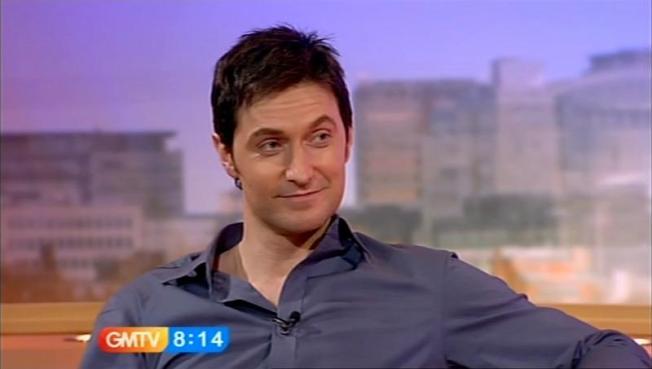 Richard on GM TV with his "Lucas Black" hiair.

The bearded beauty at The Hobbit press conference. Not his natural color, but getting closer. 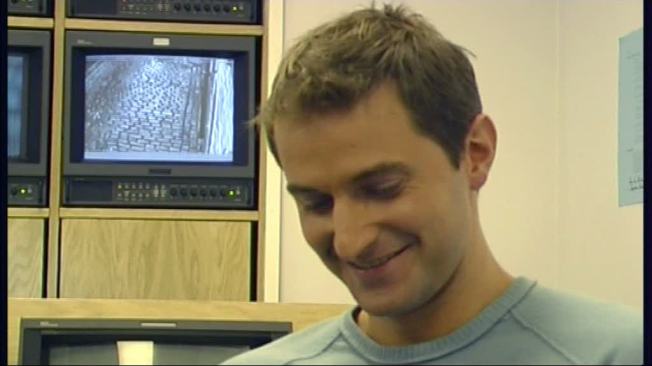 Richard in the interview extra on the "Frozen" video. Love those smiles. 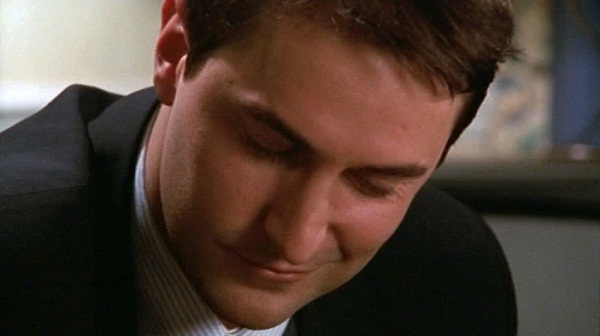 The boy from next door. Richard as Ian in Ultimate Force with (we think) his natural hair color.

Shades of Armitage: which hair color (s) do you like the best?

Sherry doesn't like it when Guy questions his authority, thus feeling the need to vilipend his master-at-arms once more.

Vasey vilipends Guy yet again after the "Nightwatchman" escapes execution.

When I saw this word, I could only think of a certain short, balding, black-nailed, beady-eyed, silk-wearing devious creature I like to call the Treacherous Troll. Vasey was the bane of my beloved Guy’s existence.

Vilipend (verb): (1) To regard or to treat as of little value or account. (2) To vilify; depreciate.

The sheriff would vilipend his master-at-arms at every opportunity, throwing insults in Guy’s beautiful face and threatening him with bodily harm, using Guy as his whipping boy. So on those rare occasions when Guy stood up to Sherry, I rejoiced. If only he had made certain Vasey really was dead . . . 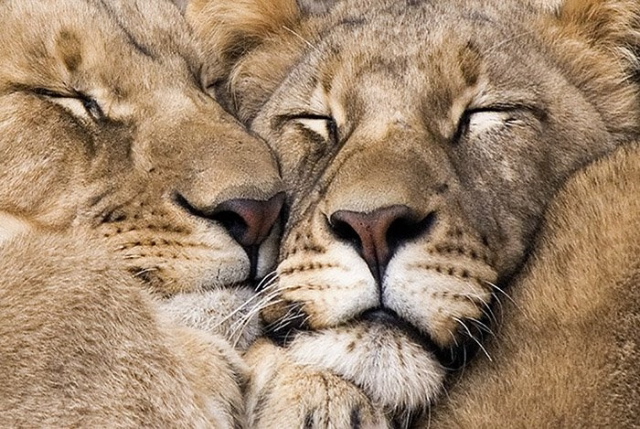 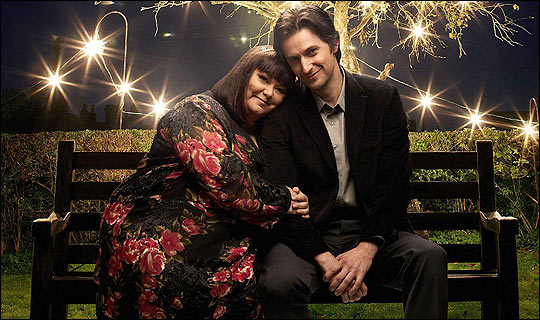 (Promo from Vicar of Dibley from RANet) 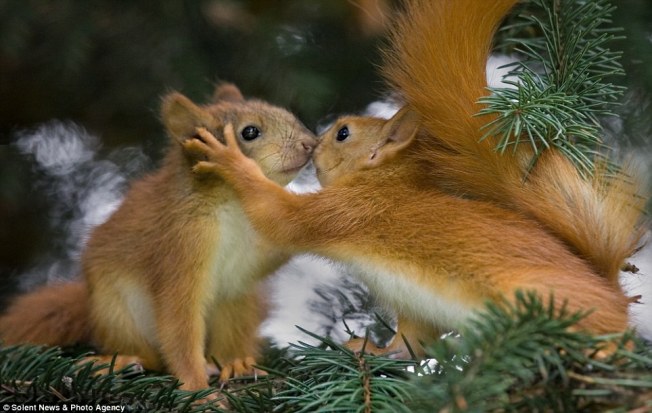 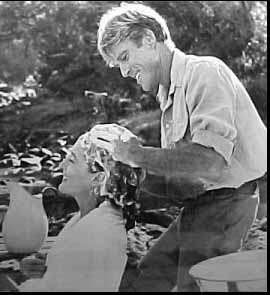 From the 1985 movie Out of Africa. Robert Redford as Denys Finch-Hatton and Meryl Streep as Karen Blixen, better known by her pen name, Isak Dinesen. There is something incredibly sensual about this scene in which Finch-Hatton washes the hair of his lover, Karen. I can easily imagine the nimble fingers of Richard’s strong, elegant hands working the shampoo into her hair, then cupping the back of her head as he lifts the pitcher and pours the water to rinse her tresses.

(Finally eaten my first meal since Monday night. Toast and jam can be truly tasty.) 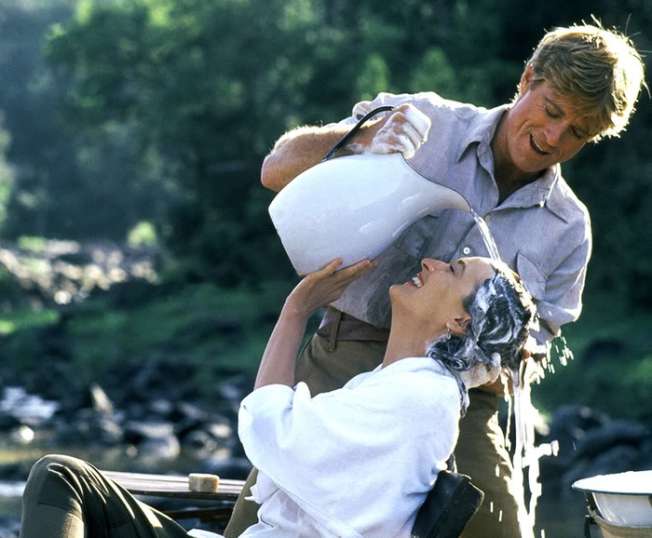 Guy, I wish you would "look back, look back at me" like that. *sigh* 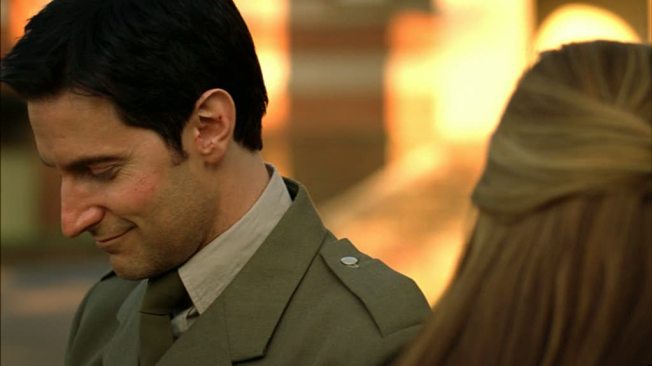 Sgt. Porter and Layla visiting the memorial. "You're not going to kiss me, are you?" I really don't think Layla would have minded doing just that.

Thank you, ladies, for carrying on whilst I have been under the weather. When I reached the point I could not longer remember where certain keys on the keyboard were located and found myself leaving out important words, I thought it wise for me to step away for a bit.

I have been sleeping when I could, that is, when my clogged nasal passages would allow it. I kept waking up to discover someone had apparently taken an old jar of Lepage library paste and liberally applied it to my lips and the inside of my mouth. Hmmmm, hmmmm, good. I have had some drainage as my throat is very sore with a nice big lump in the center of it.

Still, I know this, too, shall pass, although it shall also eventually return.

I cannot remember a time in my life when my sinuses/allergies have not caused me grief. One of my most vivid memories from childhood is the scent of Vick’s Vapo-Rub and the hissing sound from the vaporizer beside my bed. It is a strangely coomforting memory.

Speaking of being under the weather–do you know the origin of that phrase? I have heard it my entire life but never knew until I decided to look it up. (I have the sort of mind that loves collecting sundry and assorted facts. When Trivial Pursuit used to be so popular, my team never lost. Ever. Well, I was rubbish at sports, so I had to be good at something. But I digress . . .)

Turns out “under the weather” dates back to the days when most passengers traveled by sea rather than air. When the ships encountered rough seas and began rolling and pitching, passengers prone to seasickness abandoned the decks and moved to spots lower in the vessel. There they found some relief as the ship’s movements were less noticeable.

Well, I must leave you with some Armitage goodness and wishes for health and happiness for you all. I hope to get caught up on replying to your comments later.