Richard is not unlike the Pied Piper. He can play his tune and I would follow him anywhere . . . 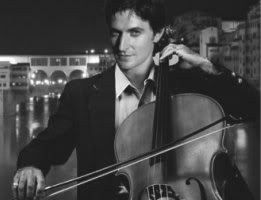 A photo manip--the closest thing we have so far to seeing Richard play the cello.

Richard appears to be playing air guitar as he rocks out as "My Celebrity Boyfriend's" Liza Frank sings.

We know that our Richard is something of a Renaissance man. Not only can he act and dance, he can also sing a treat and play at least a couple of instruments (the cello and the flute). Because music means so much to me, I find myself daydreaming about Musical Armitage from time to time . . . wondering what songs he listens to on his iPod when he runs, speculating about the songs he sings in the shower (he just seems like the kind of guy who would sing in the shower),pondering what his favorite compositions to play on his cello and his flute would be.

One of my personal fantasties involves bundling up on a winter’s evening and crunching through powdery snow to go Christmas caroling with Mr. A. I haven’t been caroling in quite a while and I dearly love to do so. The likelihood of snow here at Christmas is pretty much nil, so this is definitely a dream. But I think it would be so much fun!

Of course, I wouldn’t mind seeing him playing the flute, either, another favorite instrument and another opportunity to watch those expressive, artistic hands at work. Play me your tune, Richard, and I will follow you wherever you go. *sigh*