The Adam's-apple of Desire. The Floppy Black Pirate Shirt. The hand. Simply--wonderful.

Sir Guy and those distinctive gloves with their wolf’s-head clasps. The accessory that brought us “glove love.”

I swear, this screencap looks like a fine oil painting of a very fine subject. I love the way his face is lit and the warmth of the hues. 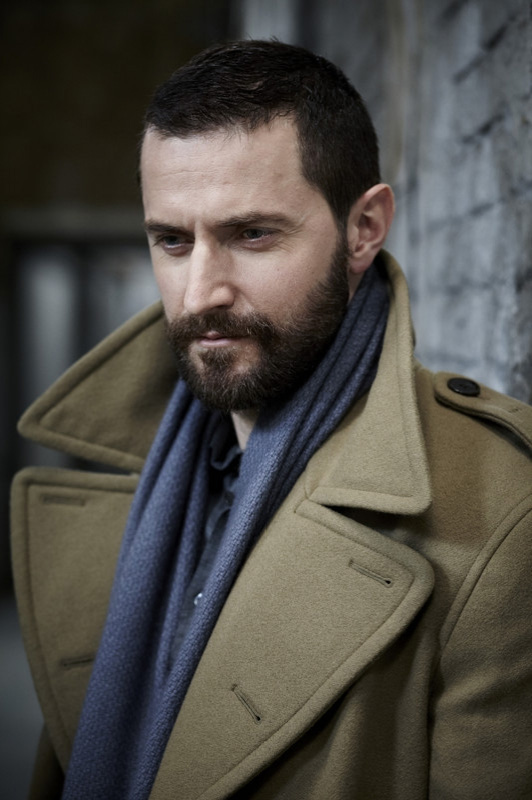 “Alexei Evanovich.” The tall bearded man in the expensive-looking camel hair coat took my hand in his and shook it, his voice a dark chocolate rumble with strong Russian inflections.

I am a sucker for Russian accents.

I found myself idly wondering if Alexei the writer also played an instrument.  Those certainly would have made excellent musician’s hands.

Perhaps he enjoyed DIY, building bookcases and laying new flooring.  The build beneath that handsome coat—a designer one, perhaps?–was definitely an athletic one.

Women aren’t supposed to undress men with their eyes—it’s the other way around, isn’t it?—but I definitely wanted to see more of Mr. Evanovich.

Focus on the task at hand, I told myself, giving my brain an inward shake.

I offered Alexei a tentative smile as I tried to return his firm grip in kind.

If the hands caught my attention, the eyes only increased my interest.

A piercing grey-blue beneath thick brows a dark reddish-brown in color, they were framed with ridiculously long, lush eyelashes. A disarmingly feminine touch in an otherwise rather stern and undeniably masculine face.

Most women would have given their eye teeth for lashes like that, I thought.

Those eyes were studying me. Taking in my own measure.

I waited for the typical response. Funny, you don’t look like a Charlie.

Alexei tilted his close-cropped head, a faint furrow in his brow, a distinct glimmer of interest in those eyes.

“Is that a shortened form of Charlotte? My mother’s favorite English novelist was named Charlotte. Charlotte Bronte,” he queried in a polite tone. “She truly loved the novel Jane Eyre.”

Well, that was a new one.

I shook my head slowly. “Actually– no. I was supposed to be a boy. I was the third of three daughters, you see. My dad was Charles, hoping for a Charles Jr. And when he got me, he decided I should be named Charlie anyway.”

I shrugged my shoulders. “Didn’t work, though. I always had a lousy pitching arm.”

He raised those striking brows quizzically at my words.

“Sorry, Mr. Evanovich. My dad loved the Great American pastime of baseball. Wanted to have a Little League player in the family.”

Alexei’s mouth curved into a disarming smile that transformed his somber face.

I caught a glimpse of what he must have looked like as a boy.  Very appealing.

“Ah, of course. I myself prefer your version of football. A livelier game—baseball takes so very—long.”

His forehead crinkled as if he was slightly embarrassed to admit such thoughts.

I laughed. “I absolutely agree. Daddy is the baseball fan; the Barnes women all love football. Nothing like cheering on a wide receiver who races 50 yards down the field for a touchdown.”

My, my, the quality of dentistry in Russia must have improved over the years.

“It—gets the heart pumping, doesn’t it? This American football of yours.” He said, his strong features further animated by his enthusiasm for the topic.

I returned his smile, wishing I had indulged in some White Strips before coming to meet him. And worn that new peacock blue dress with a hint of cleavage and the stiletto boots instead of my serviceable sweater and slacks ensemble.

In fact, I felt rather shabby and, well—dingy–compared to this elegantly handsome creature with the delicious accent.

And those hands. He talked with them, too, patting his broad chest as he discussed the energizing merits of the gridiron.

“It gives you—how do you say?” He frowned a little and then raised his brows as the word he sought came to him.  “A—rush.”

“Yes—a definite adrenaline rush.” I agreed, smiling up into those keen blue eyes.

The truth is, my own heart was beating faster under my russet sweater.  I was having a bit of an adrenaline rush of my own . . . 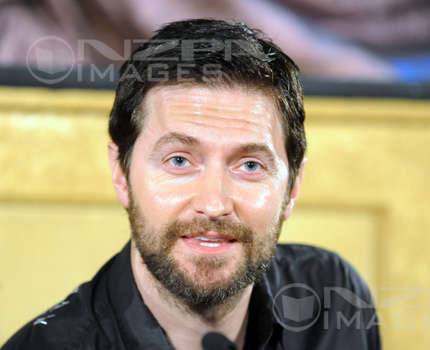 You will notice that my background photo here at the blog is of Richard with his beard and that hot pink shirt. Richard’s looking pretty darned hot himself.

I find the beard–which was a shock at first, but one I quickly embraced–very attractive on him. The growth patten of his beard is interesting; it doesn’t sort of crawl up his cheeks with that fuzzy look some fellows get (I fear I am thinking of you Aiden Turner. You’re a cutie but you easily take on that Wolf Boy look). Yes, you lose the jawline with the beard, but the beauty of his mouth and that grin is still visible. And those eyes! Ah . . .

The beard gives him a more mature look, a seasoned look. A man who has lived and has tales to tell.The Project Magazine shoot made me envision him as a Russian author named Alexi Evanovich. I’ve even written the beginning of a fiction featuring the chap. I don’t know if I will go anywhere with it, but it was fun.

I find myself wondering what he would look like with S3 Guy-length hair and his current beard. I’m thinking I would like it. I adore his whole Thorin look, of course.

It’s calm here this morning. The temperature has dropped 15 degrees since the early morning hours when I couldn’t sleep. There is some sunshine peeking through the clouds. We still have a 50-50 chance of rain, but the thunderstorms that can spawn the dreaded funnel clouds are no longer expected.  Our homes, businesses and lives remain intact. We are thankful that once again here in south Alabama we dodged a bullet.

Everyone was not so fortunate. Tornadoes in northern Alabama that moved into Kentucky and Indiana destroyed and damaged homes, a school, a prison, businesses. Worst of all, at least 30 lives–that which you cannot replace- -have been lost.  As the rubble is sifted through, very likely that death toll will rise.  Some of those who suffered more damages had just recovered from last April’s killer tornadoes. It is heartbreaking; Our thoughts and prayers to all those victimized by this latest killer storm system.

I read a online article written by a reporter in north Alabama about the aftermath. The bright spot in it were these words: “I saw neighbors helping neighbors.” This doesn’t surprise me. Still, it is so encouraging to know the good people of this state embrace a sense of community.

I know that in Australia, where several of our regular readers and commenters live, there has been flooding with more rain expected. I hope that all of you and your friends and loved ones will remain safe.

It’s a tough old world. But if we stick together and help one another out, it makes picking up the pieces a little bit easier.