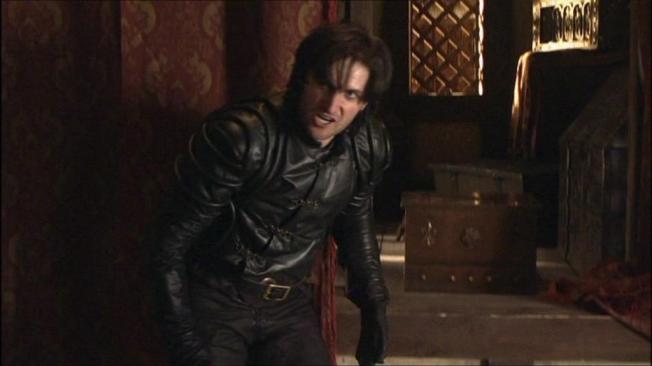 Sir Guy, once more being bested by his enemies. He still looks hot, though.

Gosh, I feel practically highbrow with these latest words–not in Dr. Servetus’s territory, but drifting in that direction.

reductio ad absurdum: (noun) Demonstration of the falsity of a premise by showing an absurdity to which it would logically lead.

The first assocation I made with Richard Armitage and his characters and today’s word: Guy of Gisborne. Guy is the sheriff’s master-at-arms. He is a trained knight, experienced in weaponry, tall, broad-shouldered and very fit *squee!* And yet he is constantly getting whupped by a woman more than half a foot shorter than he and a weedy-looking Justin Beiber look-alike.

I find it a reductio ad absurdum that a vile creature like the sheriff would have kept Guy in his office– that he would have been promoted to that office by Vasey–if Gisborne were as much of an numpty as he was presented to be. Perhaps the Treacherous Troll wouldn’t have killed Guy or had him killed in a fit of pique; rather, he would have kept Guy around in a more menial position so he could continue to enjoy abusing and belittling him. Vasey wan’t a sentimental type. He wouldn’t have kept Guy as his master-at-arms just because he was pretty and had a great arse.

Oh, I know, I know–it’s a child-friendly show so the baddies had to be made to look like incompetent fools. I’m just sayin’ . . .

I am sure you can think of other cases of reductio ad absurdum related to RA and his characters.