Imagine it's "The Hobbit" premiere. Will we feel so very different?

When I was a little girl, the British Invasion was underway. I remember my oldest sister had a wallet-sized rectangular photo of the Beatles. It was in black and white, with a conspicuous pink lip print across it (I think she might have used her Pepsi-flavored lippie when she gave John, her favorite Beatle, a big kiss. I preferred Paul). I wonder if she still has that photo somewhere? Never mind, our affection for the Beatles and their music is undiminished.  A classic is a classic is a classic. And the songs of the Beatles are modern classics. 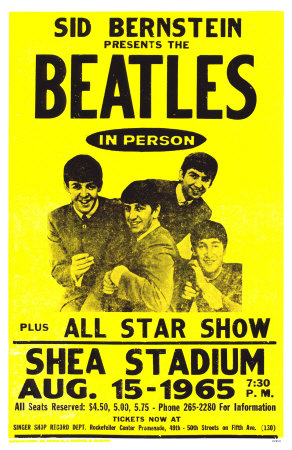 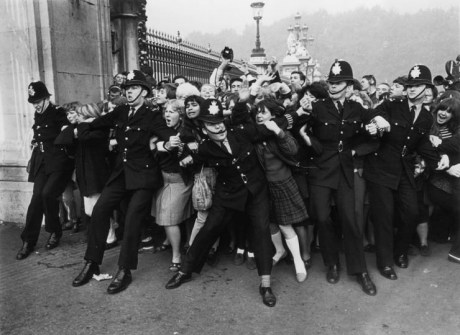 I can't help feeling sorry for these poor Bobbies. You can't keep an ardent fangurl back for long.

I know exactly how she feels. What I suspect I would look like(inside my head, at the very least) if I ever got to see RA up close and personal.
(Beatles fan photos courtesy of thesecretagent.wordpress.com)

At age five, I saw the images of girls at the Fab Four’s concerts and public appearances screaming and fainting, trying to scramble over barriers and push past police officers; girls thudding and squeeing and fan-gurlling in a major sort of way. Even Elvis, whose debut on Ed Sullivan was before my time, wasn’t as huge as the four lads from Liverpool, it seems. Even in a world without the internet, Facebook, Twitter and the like, you pretty much had to live under a rock not to know about the latest British import. I liked their music, but I thought those grown-ups had gone a bit bonkers to behave that way. Even when I hit my teens, I wasn’t one to pour over endless copies of Tiger Beat magazine, plaster my walls with posters of celebs or squee alot. Much too mature for that, don’t you know.

I actually do know someone who attended the Beatles’ famous 1965 concert in Shea Stadium in New York. Burke “Sweetie” McFerrin, our retired public librarian, was there. Sweetie called it a once-in-a-lifetime experience. I am sure that if I ever get to see Richard in the flesh, to actually get to see him perform on stage, I will find it just as memorable as Sweetie found her concert. Just the thought of it makes my heart beat a little faster.

I ask myself, would I be able to keep the excitement, the pure exhilaration of the moment from sweeping me away? I noticed that the Beatles’ fangurlz often ended up crying, sobbing aloud. I once scoffed at such behavior. But if tears came to my eyes the first time I saw Paris in person–and they did–wouldn’t seeing the lovely, dazzling, wonderful Richard Armitage in person likely bring me to cry?

As RA (and The Hobbit) Mania takes hold, can tattoos featuring Thorin and his band be far behind? Although I personally draw the line at getting a tattoo.

(I should add that thought of crying slightly terrifies me, as I cry with my whole head. Seriously. Tears from my eyes, nose, running and drool dripping from the corner of my mouth.  If my ears could weep, they’d be at it, too. Not a pretty sight.)

Perhaps I wouldn’t cry, but would I be able to string together a coherent sentence? Or keep a silly grin off my face? Would I be able to stop talking about it for days, weeks afterwards?  Would I be able to maintain my middle-aged, respectable southern lady dignity? Heck, would I even care? And I am not necessarily talking about meeting him face to face–just being in the same theatre with him, watching him on stage, very possibly from the nose-bleed section, yet knowing I was in the presence of greatness.

Richard signs autographs for fans lining the red carpet at the BAFTAs. Photo by Koolkat.

Some of you have actually met Mr. A, if only briefly, gotten his autograph, taken a photo with him, perhaps even had a short conversation.  Did you feel as if you maintained your composure well?  How did/do you think you would react?

When Thorin arrives in mid-December, larger-than-life and in 3D, no less, I suspect the reaction will rock me to the core.  I may retain reasonable composure on the exterior. But inside? I’ll be just like those squeeing, thudding, sobbing young ladies seen above.

Because the RA Invasion will have arrived. And my particular brand of Richard Armitage-induced mania will well and surely kick in.

Will you save your The Hobbit tickets for posterity? Beatles Concert Ticket (Photo credit: b.reynolds)