A tall, well-built man, beautifully knit together; broad, strong chest, big elegant hands, a swan-like neck with the most delectable Adam’s apple, and a dancer’s long, lean and muscular thighs. A figure of grace and beauty both at rest and in motion, incredibly expressive.

And the face.
A visage with a noble profile, such as might have graced an effigy of a long-dead king. One can easily believe noble blood may very well flow in those veins.

A proud aquiline nose and equally masculine jawline.  Lips, not full, and yet retaining an incredible sensuality.

The delicate Cupid’s bow of the upper lip invites one to trace its outline with a fingertip–or the tip of a tongue, perhaps?  A mouth that gains a new softness, an aching vulnerability when he sleeps. 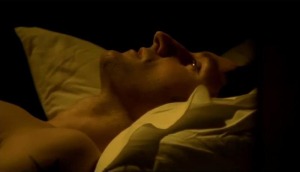 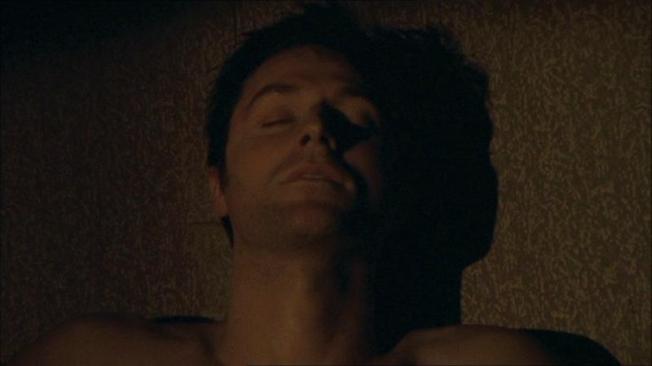 A lovely blue that is amazingly changeable, sometimes as cerulean as a clear summer sky, sometimes as stormy as  a bank of thunderclouds; crystalline green eyes, eyes the color of  golden topaz and desert sand.

Beautiful eyes fringed in thick, long lashes and framed by bold, well-shaped masculine brows that have never undergone a waxing–thank goodness.  Eyes surrounded by endearing laugh lines. The eyes of a man who has a zest for life. Eyes that express the gamut of emotions: anger, rage, worry, tenderness, desire, fear, self-loathing, weariness, sorrow, delight.

And those smiles. Dazzling. And it’s not just the pearly whites that make those grins so amazing. It’s their genuine quality and the way the smile is reflected in those eyes. A smile that starts on the inside and works its way out. 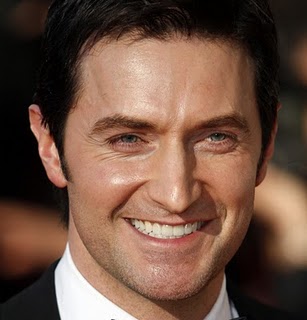 The hair, thick and fine-textured, incredibly soft-looking, with a tendency to wave and curl with length. That endearing  cowlick.  Whether sporting a floppy fringe, curls at the nape, Guy’s extensions or his current short hair, one wants to reach out and touch., brushing back an errant lock or brushing fingertips across the top of that crop. 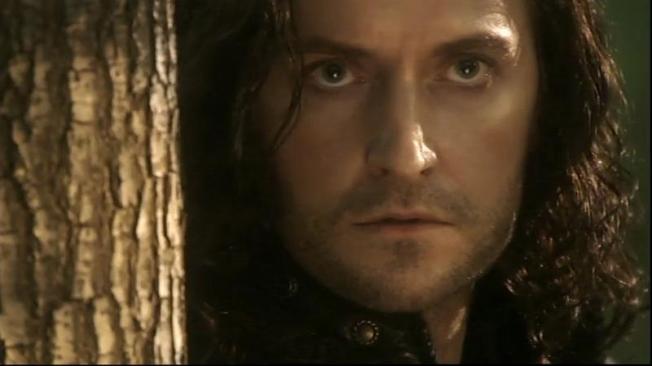 There’s also the allure of the stubble, the beauty of the beard and the appeal of the clean-shaven jaw; the charm of those elfin ears. Those crinkles. The expressive raise of a brow, flicker of an eyelid, curve of the mouth.  What a marvelously mobile and watchable face you have. 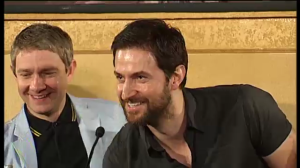 So NOT a cookie-cutter bland sort of handsomeness. As for the incredible talent, the delightful sense of humor, sweet modesty, keen intelligence, well–you are quite the package, aren’t you?  I would say you, Mr. Artimage, and your wonderful array of ChaRActers are just what I was waiting for . . .

The darkening eye, the flash of white teeth and those strong, nimble fingers. The wolf is after its prey. I think I would come out and play with this Big Bad Wolf if he asked . . .

Oh, those big, beautiful--and sometimes lethal-- hands. And the glimpse of those piercing eyes. 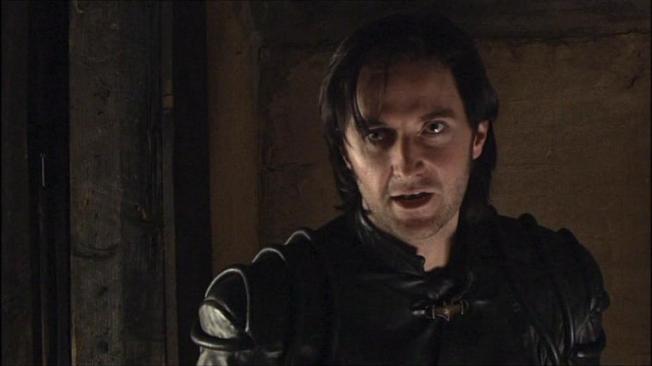 Ah, the floppy hair and the dangerous glint in those kohl-rimmed eyes. 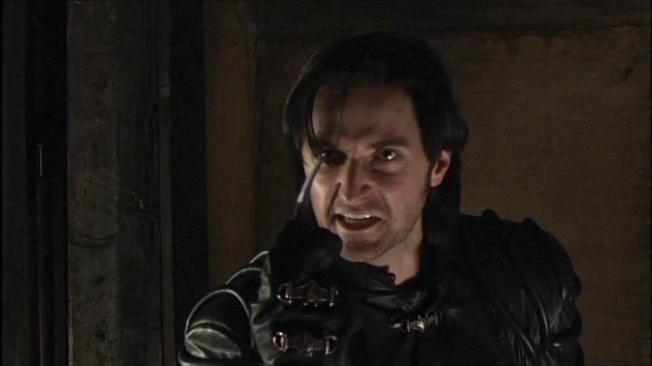 The wolf shows off his sharp claw.

Thwarted yet again. And still sexy as ever.

(This is the second in a series of planned posts exploring the cities, towns and counties inhabited by RA and his ChaRActers . . . your comments and additions are very welcome, too!)

In the northern part of England lies  County Durham, bordered by the counties of North Yorkshire to the south, Cumbria to the west and Northumberland to the north. And in the northeastern portion of this county you will find the city of Durham, This is the county town of the larger ceremonial county and hometown of the enigmatic rebel, Ricky Deeming, leader of the 60’s motorbike gang, the Durham Defenders.

It’s a part of England where practically every village once could boast of its own coal mine, where mustard making and carpet weaving were among the  important industries.  Once possessing a thriving population of many medieval weavers, Durham in the 19th century became the home of Hugh McKay Carpets, famed for its axminster and tufted carpets until its closure a few years ago.

This 1963 photo of early morning in the County Durham town of Hartlepool offers an image that likely was familiar to Ricky. 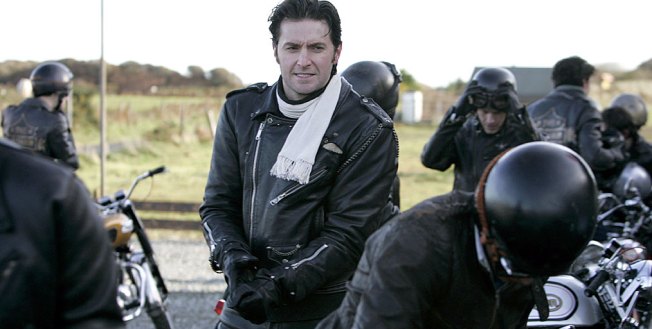 Long before the TGV in France, the Transiberian Railroad or bullet trains in Japan, there was the very first train to make the first journey on the first public railway in the entire world. And it happened on Sept. 7, 1825 in the little County Durham town of Darlington. Locomotive #1 carried nearly 600 passengers at an astonishing average speed of 12 mph. And the world was never the same. 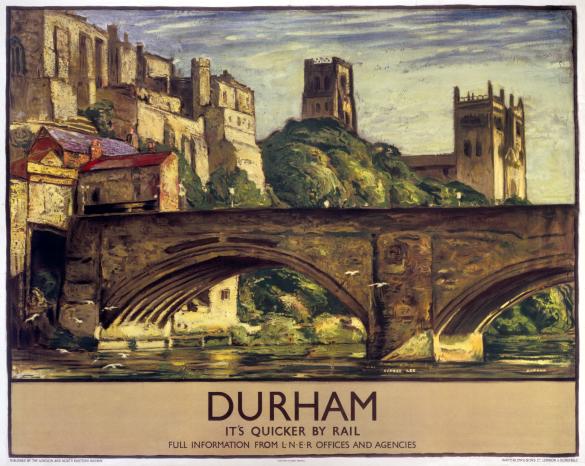 County Durham is also home to the world’s first railway bridge, the Causey Arch, built in the mid 1720s. For more than 30 years, it was the longest single span in Britain. This simple, graceful arch was considered the most ambitious feat of engineering since Roman times. Contrary to local legend, it’s unlikely the stone mason of the arch, fearing it would collapse like the previous timber bridge, actually jumped from it to his death. But it makes for a colorful story. 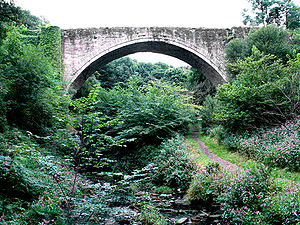 Causey Arch over Causey Burn. A previous timber bridge collapsed, but Causey is still standing after nearly 300 years. In the '80s, the bridge was restored and reinforced. A nearby quarry is popular with rock climbers.

The River Wear winds through the county and city, and Durham Cathedral and Durham Castle sit high on the banks overlooking the river. The beautiful cathedral, considered one of the finest examples of Norman architecture, is better known as “Hogwarts School” to many fans of the Harry Potter films.

Right next door to the cathedral is Durham Castle, an 11th century Norman motte-and-bailey structure which is the home of University College, Durham. It’s the only college entirely confined within a castle’s walls and the only Norman castle keep that never was breached.

The Great Hall of Durham Castle dates back to the early 14th century, and was long presided by the Bishop of Durham. Today university students and faculty eat their meals here.

Now owned by the National Trust, Washington Old Hall, located in the Durham mining village of Washington, is the ancestral home of America's first president. A portion of the manor house dates back to medieval times. Washinton Old Hall also features a Jacobean garden and wildflower fruit orchard. It plays host to school groups, community and corporate events and weddings. 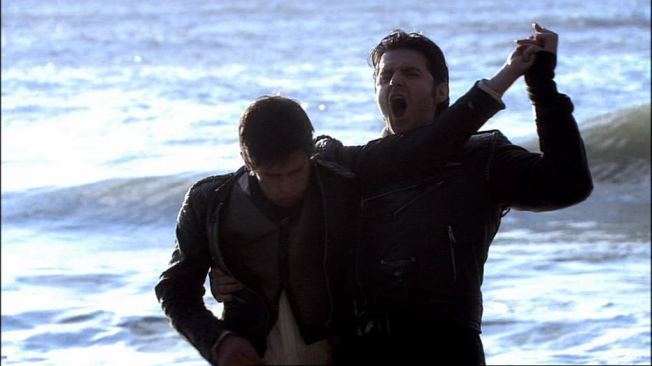 The newest member of the Durham Defenders has undergone a ceremonial dunking by its leader, Ricky, in the chilly surf of Seaham Beach.

A beautiful shots of the waves crashing along the coast of Seaham.

Seaham Beach on the northeast coast of County Durham is renowned for its “end of the day” sea glass. In Victorian days, a bottler was located nearby and bits of glass left over “at the end of the day” were dumped over the cliff and into the sea. Collectors have come from far and wide to seek out this gift from the sea, with the colorful pieces of  vintage sea glass  often used to make unusual jewelry.

More fun facts about Ricky Deeming’s home county:
In 1720 Daniel Defoe wrote Robinson Crusoe in the ancient town of Gateshead, Tyne and Wear. Gateshead was largely destroyed by fire in the mid- 19th century. Not long afterwards, a Gateshead house became the first home in Britain to be lit using electric bulbs. Gateshead,Tyne and Wear is also the home of the contemporary steel sculpture The Angel of the North. 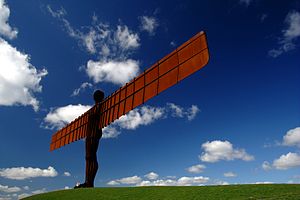 The Angel of the North, designed by Antony Gormley and completed in 1998, is now frequently used by film and television productions to represent Tyneside.

*Stockton-on-Tees has the widest high street in England, at at No. 58 you will find the shop where a chemist invented the first friction match in 1827. Stockton is also the birthplace of famed furniture maker Thomas Sheraton.

*The first “keep fit” class for housewives in England was held in Sunderland in 1929. Sunderland FC was also the first football club to tour overseas, visiting America in 1894.

*During the Napoleonic Wars, a French warship was wrecked offshore from Hartlepool and the only survivor to reach land was the ship’s monkey. The citizens manhandled the poor monkey into the village square and hanged him as a spy.

*High Force on the River Tees, near Middleton, with a drop of 70 feet, is not the highest, but it is the biggest waterfall in England in terms of water flow. 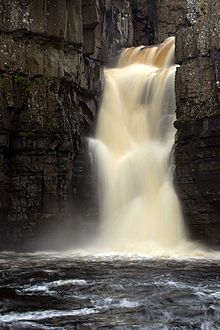 There is a lot more to learn about Ricky Deeming’s home county. Use the links provided for further reading. The information shared in this post came from Christpher Winn’s I Never Knew That About England supplemented by Wikipedia. 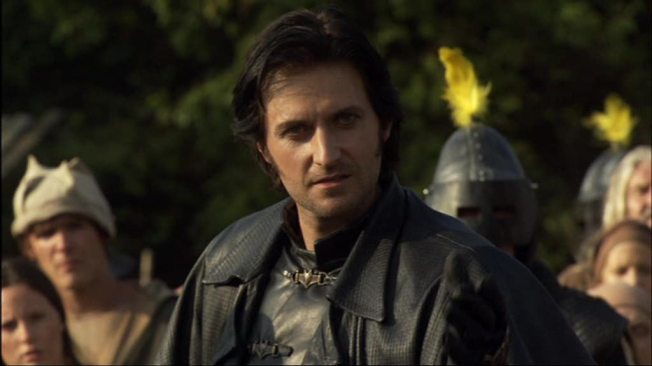 Vasey: “Behold, standing behind me–the eighth wonder of the world. He’s sexy–and he knows it.” 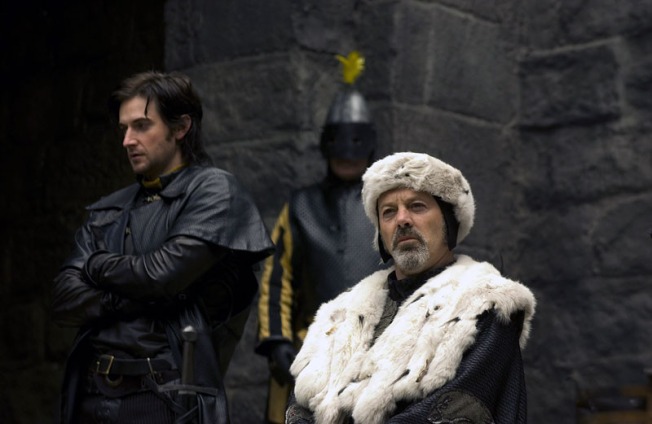 Guy: "It's a tough job, but at least I get to wear the sexy black leather and not some stupid Tweety Bird thingamummy or dead animal on my head . . ."