In the interest of equal time for our MI5 and MI6 officers, more peeks behind the scenes, this time on the Strike Back set with RA as the heroic Sgt. John Porter.

I already liked BDUs, but after see RA as John Porter, I really, REALLy like them. Something about a man in uniform . . . 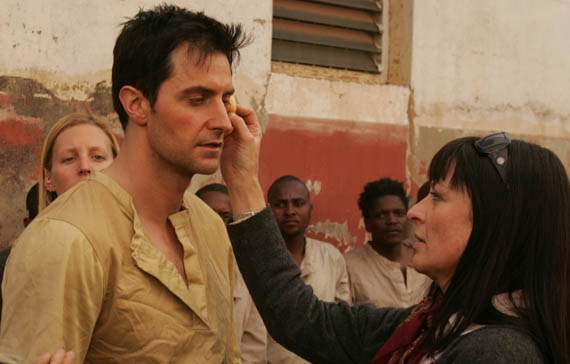 Attending to his makeup--looks like this might have been close to shooting the fight scene in the exercise yard at Chikirubi prison.

Looks like Richard, Andrew and the other lads are doing some rehearsing with their weapons before shooting the opening helicopter sequence.

With Orla Brady as Katie after fleeing captivity . . . John and all his guns (the weapon and those bodacious biceps) battle it out with the remaining terrorists.

He's got a blood-stained T-shirt and a big gun, but RA manages to look so sweet here somehow.