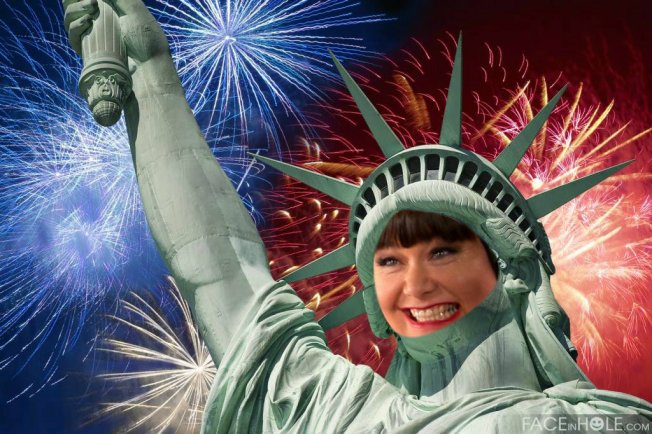 Tomorrow is a holiday here in the U.S., the celebration of the date our forefathers signed their Declaration of Independence from the mother country back in 1776. Benjamin Franklin, John Adams and Thomas Jefferson writing the Declaration of independence (1776) were all of British descent. (Photo credit: Wikipedia)

Americans tend to celebrate the 4th of July with barbecues and picnics, trips to the beach and the lake and pyrotechnic displays.

We’ve already had fireworks here thanks to Mother Nature. A couple of fierce thunderstorms moved through tonight bringing some much-needed rain (yay) and high winds that toppled some trees here and there. We are still safe and sound with no power lines down, thankfully.

These folks are Brits, but they’ve decided to become Americans for the Day and celebrate the Glorious Fourth with us at TAE. 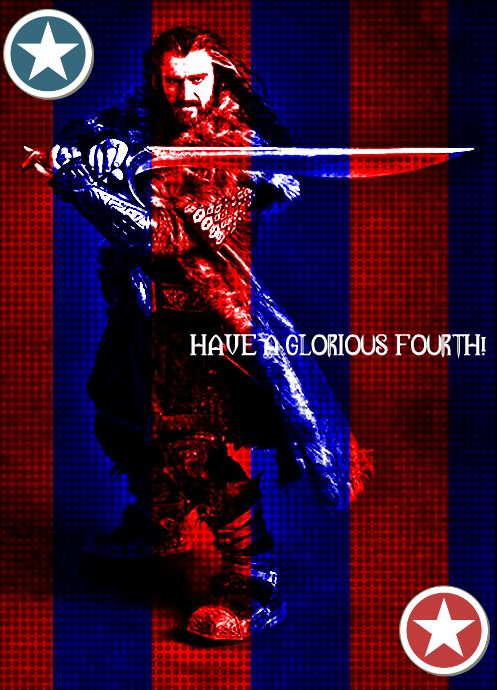 Reports have come in today that actor Andy Griffith has passed away at age 86. Griffith was a fixture of my childhood, the kindly and long-suffering sheriff of the fictional southern town of Mayberry on the long-running comedy the Andy Griffith Show.

Sherrif Andy Taylor, the man who enforced the law in Mayberry. 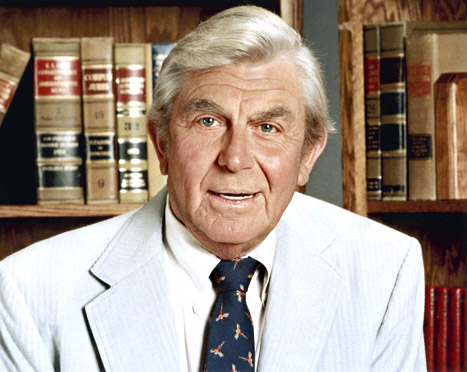 Ben Matlock, who always looked spiffy in his seersucker suits.

However, if you’ve only ever seen Griffith in those amiable roles, you’ve missed out on just what a powerful actor he could be.

In 1957’s A Face in the Crowd,  directed by Elia Kazan, Griffith plays a likeable Arkansas drifter who becomes a radio personality known as Lonesome Rhodes. Rhodes offers homespun homilies and tunes on his guitar to the masses, who adore him. As his fame increases, he moves into television and becomes a political kingmaker–and an egotistical, power-mad man.   It is a fine film with a stunning performance by Griffith, and a theme that still resonates today–that power and fame can and do corrupt.  It’s a film definitely worth seeking out if you’ve never seen it.

Patricia Neal and Andy Griffith in “A Face in the Crowd.”

RIP, Sheriff Andy, Mr. Matlock, Lonesome. You will be missed.

It’s been hot, hot, hot in my neck of the woods and for many more of you out there. I think it’s time for a bit of Christmas in July–snowflakes, cozy sweaters, Santa and his elves, and a delicious turkey dinner . . . all in TAE style. Enjoy! 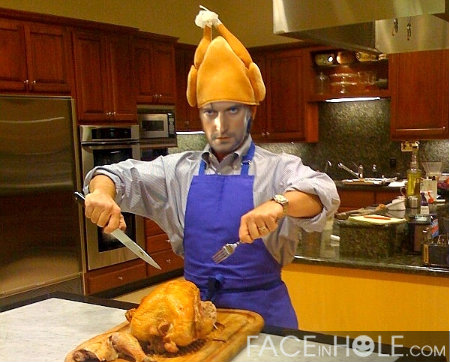 Sir Guy is not amused at the prospect of criticism for his carving technique.

Guy’s smirk indicates he knows he still manages to look hot even in a ridiculous holiday sweater and dodgy hair. 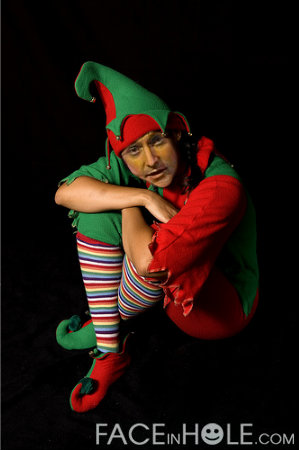 Who knew Ebenezer Scrooge could be . . . HOT?

In another vain attempt to lessen her husband’s general gorgeousness and tremendous appeal to the female population, Gerri has dressed him in a rather frightful Christmas sweater. Nope, didn’t work.

And come December, we’ll all enjoy a special holiday treat, courtesy of Sir Peter Jackson and a certain talented actor we all know and love . . .

Is the past a better place to live than the present? Is it natural and expected for us to believe the grass is indeed greener on the other side?

Those are questions posed by two of writer-director Woody Allen’s films Midnight in Paris (2011) and 2010’s You Will Meet a Tall Dark Stranger.

I have watched both films several times and there are certain parallels between the two projects, beyond the obvious ties to Allen.

Owen Wilson and Rachel McAdams on the bridge at Monet’s home and garden at Giverny in a scene from “Midnight in Paris.”

Roy’s first novel, we learn, was a success with critics and readers alike. Unfortunately, his next two efforts were not so well-received. Now he’s on the edge of desperation, hoping his latest work will be another bestseller—hoping to prove that early success was not a mere fluke.

Feeling her biological clock ticking away, Roy’s wife Sally (Naomi Watts) wants a child but the couple’s precarious financial situation tends to rule that out. Sally is weary of struggling to pay the bills while Roy awaits word on whether or not his novel is accepted. The couple has to depend on regular handouts from her dotty mother Helena (Gemma Jones) to keep the rent on their flat paid.

Sally gets a new job at a large and thriving art gallery and soon develops a crush on her handsome, charming boss (played by the handsome, charming Antonio Banderas).  Wouldn’t life be so much better with this rich and successful man than with the husband who was proving to be such a disappointment?

Roy, in the meantime, finds himself fantasizing about the new neighbor, a gorgeous “lady in red” played by Freida Pinto. What could he accomplish as a writer with a muse like that? 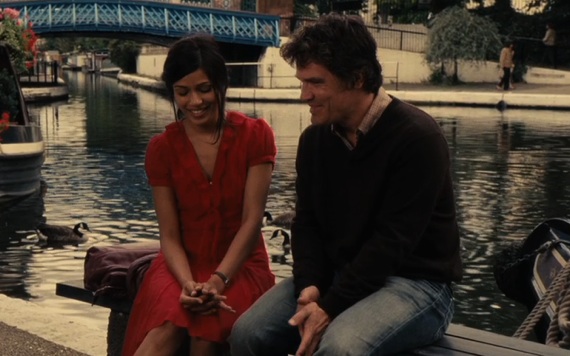 Freida Pinto and Josh Brolin in “You Will Meet a Tall Dark Stranger.”

In Gil’s case, his screenplays have been proven crowd-pleasers and led to a lucrative career in Hollywood. Still, he longs to make it as a novelist—a novelist living and working in Paris, the city of his dreams.  He imagines fondly life in the Paris of the 1920s, the Jazz Age, the glory days of American expats Ernest Hemingway and F. Scott Fitzgerald, with Cole Porter playing in the background and Gertrude Stein discussing Pablo Picasso’s latest painting.

Girlfriend Inez (Rachel McAdams) and her parents, however, are singularly unimpressed with the City of Lights.   Inez wants a house on the beach in Malibu, not an apartment overlooking the Seine. Inez is less than pleased with Gil’s desire to move from the “sure thing” of his Hollywood success to life as a novelist.

“Who wants to read a book about some guy who owns a nostalgia shop that sells old Joan Crawford cut-outs?” Inez asks with no small amount of scorn. She is supported by her old college chum Paul, brilliantly played by Michael Sheen, an irritatingly smug and pedantic professor who dismisses Gil’s protagonist—and Gil himself—as someone suffering from “Golden Age Syndrome,” seeing the past as always being a happier, richer time than the present.

In Stranger, Sally’s father Alfie (Anthony Hopkins), who divorced Helena in a quest to reclaim his lost youth and have a son to replace the one they lost many years ago, more or less buys himself a young wife, Charmaine (Lucy Punch). Charmaine, an “actress” turned escort, is blonde, hot–and dumb as a box of rocks. Alfie was clearly reacting with something other than his brain when he married Charmaine.

In the meantime, sweet, batty Helena, who is always seeking something (alcoholic) “to sip on,” regularly visits a medium in an effort to learn about her past lives in the hope of making sense of the present.

There are characters clearly unhappy with their present in both films, longing for life in a different time, a different place, with a different partner. Will any of them live “happily ever after?”

As one might expect from Allen, both films are comedies; however, Stranger falls into the comedy/drama category while Midnight is a romantic comedy/fantasy.

In Stranger, there are some unexpected twists and turns in the plot that provide a dark irony. In the end, perhaps, everyone gets exactly for they deserve, if not what they expected.

In Midnight, Gil not only dreams of Paris in the Roaring Twenties; thanks to a mysterious vintage car that stops to pick him up each night, he gets to go back in time. There he meets, among others, Hemingway and the Fitzgeralds, T.S. Eliot, Picasso, Man Ray and Gertrude Stein. In a hilarious turn, Adrian Brody makes an appearance as that perpetually self-promoting surrealist Salvador Dali. It’s a small but unforgettable role for Brody and one of my favorite bits of the film.

Gil also gets to meet a fetching young Frenchwoman, Adriana (Marion Cotillard), who has served as the muse to several noted artists. She hears the first few lines of Gil’s novel and is “hooked,” a very different reaction compared to Inez’s. Gil and Adriana are drawn to each other as kindred spirits, but there is a major obstacle to overcome. They live in two different centuries . . . at some point, won’t Gil  be forced to make tough decisions and return to the real world? Would Adriana choose to leave her time if she could?  What constitutes the perfect life?

Both films feature strong casts with solid performances; however, in the end, Midnight in Paris has the edge for me.

The cinematography is just lovely, opening with a picture postcard-like homage to Paris, the colors richly saturated, the beauty of the city prominently showcased throughout the film.

I love both cities, but I don’t get the same sense of place in terms of London in Stranger that I do with Paris in Midnight. Stranger could have almost just as easily been shot in New York and it would have made little difference to the story.

Both soundtracks are great—I do like Mr. Allen’s taste in music—but Midnight’s music is particularly wonderful for those of us who love Cole Porter and the old standards, with Orpheus in the Underworld thrown in for good measure.

It’s fun seeing the various literary and art luminaries depicted in Midnight, and Gil has a certain sweetness and guilelessness which appeals.

I suppose in the end, for me, the light-hearted fantasy and romance elements of Midnight in Paris won over the darker, more realistic elements in You Will Meet a Tall, Dark Stranger.  Watch both—and judge for yourself.