I experimented this week with not taking my daily Prilosec and only taking another OTC when I felt I needed it for my acid reflux.

The experiment did not go well. *sigh* I couldn’t get to sleep until after 4 a.m. this morning and I’ve had considerable discomfort today.  I think I will just have to deal with the possible consequences of long-term use of Prilosec and hope for the best. Sleep deprivation can’t be too good for a body, either. 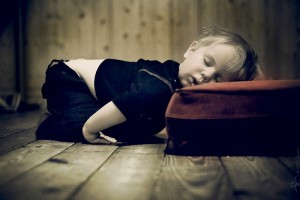 Anyway, I’ve been messing about with images of Mr. A again. Today I also got my Hobbit annual from Gloucester! I was pleasantly surprised when it arrived this early. It’s chockful of activities, which I admit I am tempted to do–I loved activity books as a child. I used to get a huge one before Christmas each year, filled with connect-the-dots, search-a-word puzzles, riddles, crafts, coloring pages and more. I had the most fun with those books.

However, I shall resist marring the thick, glossy pages of this lovely book.

I admit I have already looked at the pictures of Thorin several times. All I can say, is WOW. The “strong and fearless fighter” has me completely won over. I’d follow this guy anywhere. 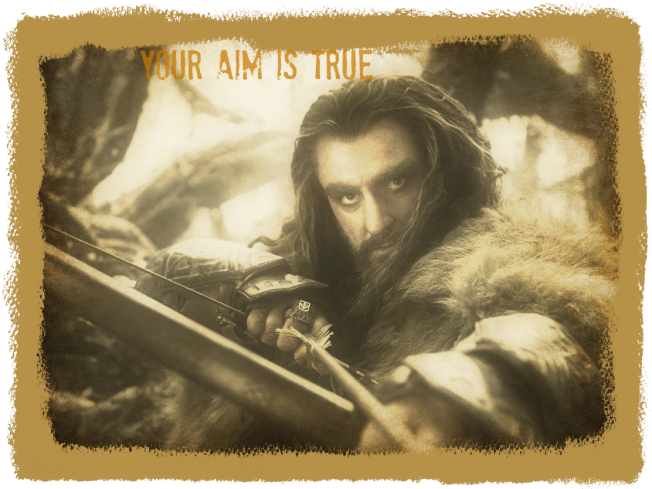 But then again, I find his CReAtor endlessly inspiring, magnetic and–beautiful.

We need to have our satellite dish adjusted, a project Benny will take on later. Those 25 mph winds we experienced recently knocked the little dish just enough askew that the signal goes in and out at an annoying high frequency. I bring this up because whenever it does go out for a prolonged period of time, I have a tendency to click the DVR button. And in my recordings, I go to “Nothing But Trailers” and a two-minute recording I have there.

And with the Surround Sound on I watch The Hobbit trailer and enjoy the sight and sound of Richard Armitage as Thorin. Sitting majestically astride his “pony,” smoking his pipe in a deeply pensive mood and leading the dwarfs in the Misty Mountain song at Bilbo’s house; the close up showing those ever-expressive eyes, wide and somber and beautiful, fringed in those lovely long lashes,  as he speaks with Gandalf. Oh, those deep, dulcet tones.

I’ve lost count of how many times I’ve watched it, but I never seem to grow tired of it. I find myself singing that song to myself quite a lot. There’s such a lovely haunting quality to it.

I hope we get many more dwarf tunes through the course of the three movies, including a raucous drinking song sung by a lot of dirty, filthy, sweaty, naughty raucous dwarfs who like to party hard.  That would be SWELL. 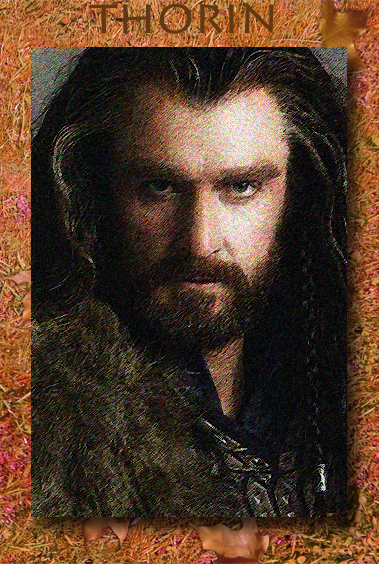 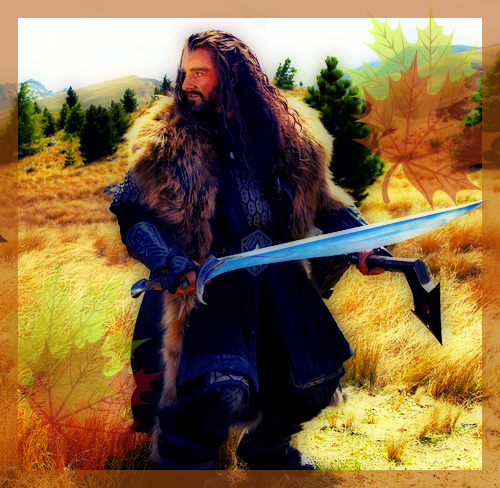 BTW those autumnal colors really do suit our warrior dwarf, don’t they?

No, I don’t mean in terms of dancing, although I suspect Richard Armitage and his snake hips could outdo Mr. T on that front. Nope, I mean in the Long-Maned Sci-fi/Fantasy Film Character Sweeps.

Back in 2000, Travolta played a role he’d wanted to play for almost 20 years, ever since he’d read L. Ron Hubbard‘s  futuristic sci-fi novel Battlefield Earth.  Hubbard is the man who created the “religion” of Scientology, of which Travolta is a devoted follower.

The results were a big-budget “vanity” film that is considered one of the worst of all time. It has a two percent rating at Rotten Tomatoes. Yes, two percent of the critics reviewing it liked it. It did a little better with audience members. A whopping 14 percent of them gave it a positive rating.  IMDB gave it a 2.4/10.

I attempted to watch the film once but the camera work was so annoying and the performances so OTT– and not even in an entertaining way–that I quickly gave up. And I enjoy sci-fi. But this was right up there in the same category with Howard the Duck and Showgirls (which is, at least, unintentionally hilarious). I think the most entertaining thing about the film was reading the reviews. Some people were quite clever in coming up with new ways to describe its level of awfulness.

Here’s a reel of a few scenes from the film to give you a taste of it:

OK so–when my husband saw a photo of Richard as Thorin, he quipped, “Hey, he looks like John Travolta in Battlefield Earth.”

To which I  gave a Guy-like smirk and replied something along the lines of, “John Travolta wishes he’d looked that good in that awful movie.”

Well, I will let you judge for yourself. 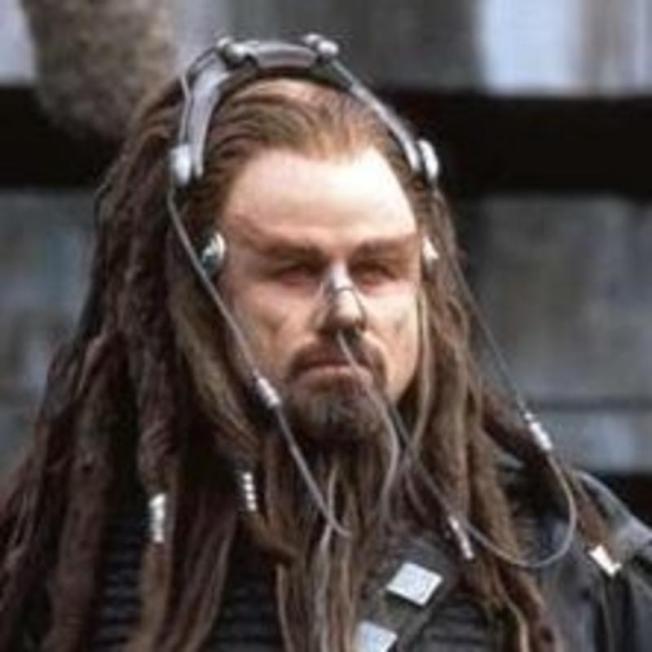 John Travolta as the alien villain in the turkey Battlefield Earth.

OK, they both have long brown hair, bushy eyebrows, beards and mustaches. They are both male. Otherwise—Mr. Travolta’s character is just flat-out creepy to me. I do not find this dude with the nose plugs attractive. However, the pointy-eared fellow below? Yummmmmmmmmm. 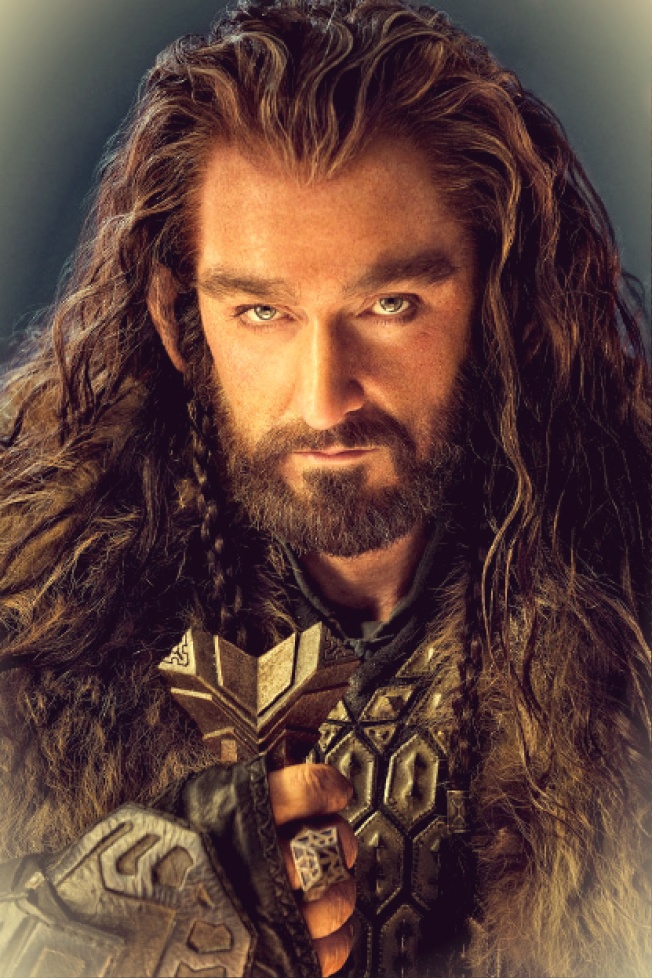 I am also quite sure The Hobbit is going to be a much, much better film than BE. I don’t think its stars will feel the need, as BE co-star Forrest Whittaker did, to apologize for being in the film.