Livestreaming is horribly frustrating for me.  The constant need to buffer, all the starts and stops in the middle of a conversation, the loading symbol right smack over the person’s face–highly annoying, especially on a night that you have eagerly anticipated for close to two years. If you’ve got a decent high-speed internet connection, it can be great. If you don’t, uhmmmm, not so much. I believe some of you share in my frustration.

Then when your computer, which has become increasingly troublesome, decides to really “act a fool,” it’s enough to make you want to bang your head against a wall if it didn’t throb so much already.

Thanks to my husband, I did have a new computer bought cheap from his boss, who’d won this HP laptop months ago and never even fired it up.

Now it’s mine. Nothing’s loaded on it yet, but at least I did have web browsers to use.

So I tried to watch the livestream of the red carpet in Wellington. But it kept needing to “load” . . . and “load” and “load” and I was stuck with Neil Finn and his band for an eternity. No offense to Neil, but I wanted Richard Armitage.

And I bloody well missed him.  I saw some of the other dwarves, Cate, Hugo, Elijah . . . but no Richard. *sob*

I was almost ready to just call it a day when I heard a certain voice. THAT voice. I opened that screen again and saw him. Richard.

Looking just as sharp as a commenter on Twitter had said. I only saw him from the shoulders up, but I really liked him in that grey suit. (Was the tie red? Hard to tell in the glare.) Loved the little wave in his shining hair. His crinkles showing in the bright sun. That sweet smile.  And was that stubble I spied? Sexy, handsome, charming man.  Finally. Richard.

Oh, you’ve come a long, long way, baby.  I hope tonight is all you dreamed of it being.

Guess who? I know who. A sharp-dressed man on his way to being a movie star!

Sorry, no pics up yet that I can share from tonight. I am sure videos and screen shots will surface soon . . .

OK, so today has gone to hell in a handbasket for me. Irritable Bowel Syndrome, too little sleep, a more or less non-functioning computer. This is the third time I’ve tried to post this. Maybe third time is the charm.

If you don’t see or hear from me for a bit, I am hoping to be able to watch the red carpet event via Benny’s desktop which is hooked to one of the flat screens. My only real option. I will try to catch up with everyone tomorrow, assuming this piece of junk decides to cooperate.

Hope you all have a wonderful night. Mr. A certainly looks handsome again today.

In case you were wondering where rto watch the big event online, here’s the skinny, thanks to Frenz. 😀 Yes! You can watch The Hobbit Premiere live and get your fix of Richard Armitage even if you’re not in New Zealand and don’t have a cable connection. Doesn’t matter. There are places around the web which will offer live, free streaming of the event. The Red Carpet will begin at 4:30pm Wellington Time with streaming coverage beginning at 3:50pm. If you’re not sure when that is your time, you can check out this clock.

Most of these are facilitated by Warner Brothers streaming through NowLive, so yeah, the NowLive link is direct. But I think most of you know which one I’m going to access. 😀

Cinemaxx (Germany; not sure it’s free but it should be)

I’m currently looking for other sites and will add as I find them and correct links as needed. Additionally, if you find some…

And here’s Richard, looking sartorialy splendid and gloriously handsome once again. A star is definitely being born.

Me, My Thoughts, and Richard Armitage

He’s rocking another great shirt. And I love the vest and tie! For a more close up look: It’s actually raining and pouring the regular wet stuff here right now. No wonder Bad and Even Worse Knee hurt all night. That may have impeded sleep, but it didn’t stop me from soaking up all the pre-premiere Hobbit hoopla. I have never been so ridiculously excited over the premiere of any movie, including one that was shot right in my hometown and county.

Of course, it didn’t star Richard Armitage as the world’s sexiest dwarf, either, more’s the pity.

Here are some photos that Sir Ian McKellen tweeted earlier of the preparations in Wellington as they literally rolled out the red carpet for Sir Peter and Company.

There are interviews which I tried to link to here, but only end up with big black holes. ?? Go to YouTube and type in “Hobbit Cast Interviews” and you should pull them up if you haven’t seen them already. Richard looks great, is in mellifluous voice and is his typical gentlemanly and articulate self. And those smiles and the laughter! 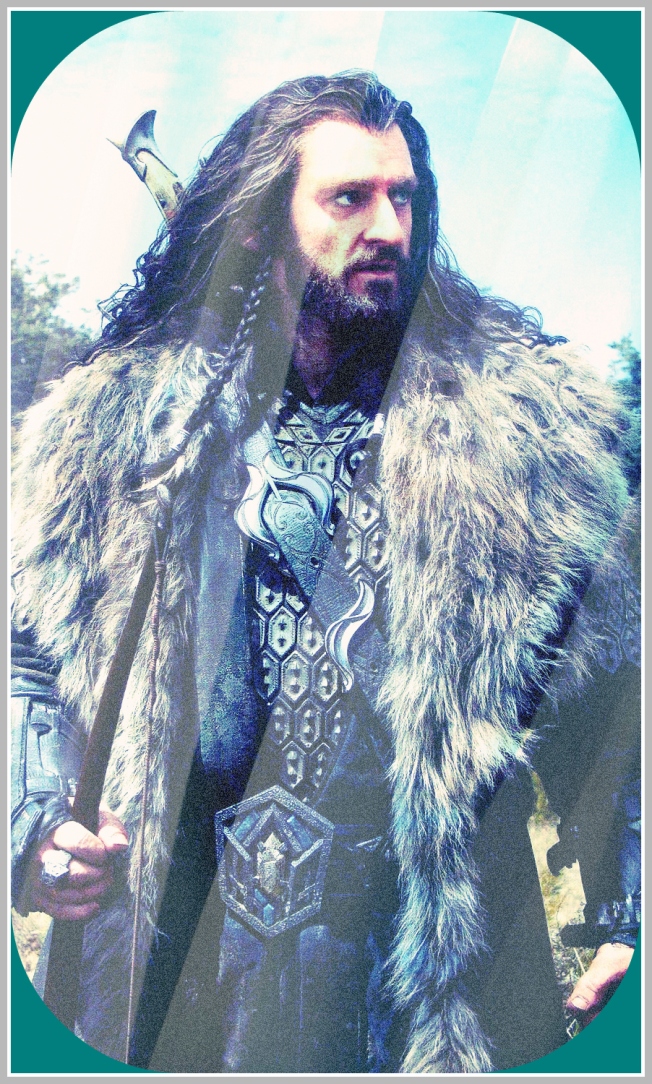 More quotes from The Hobbit Tribute: The OneRing net’s Collector’s Edition. And one of my favorite variations on a certain handsome young dwarf (to be seen in flashbacks in the trilogy–

“As a young dwarf, Thorin Oakenshield saw the dragon Smaug invade his home in the Lonely Mountain and slaughter most of his kinsman. Ever since, the exiled dwarf king has furiously pursued his revenge against the terrible wyrm.

“Veteran British actor Richard Armitage relishes the opportunity to play such a conflicted, emotionally complex character, and if anyone can accurately portray Thorin’s flaws on screen while still remaining sympathetic, it’s the talented Shakespearean actor and self-professed Tolkien fan.

A screenshot courtesy of RANet of Martin and Richard doing a short interview with News 3 New Zealand. Yes, RA is talking with those fab hands once again.

“In addition to his enthusiasm for tackling Thorin’s psychological state, Armitage’s work on the BBC’s Robin Hood makes him well-suited to the physical challenges of playing the fearsome dwarven warrior, and it’s clear from the advanced footage of the film that his bellowing baritone will also be put to use singing a dwarven dirge or two. Thorin earned the name “Oakenshield” by defending himself with a tree in a battle, and while Armitage won’t be lifting any logs, expect to see him slaying orcs, wargs and giant spiders in breathtaking style.”

Personally, I expect no less. I’ve seen Jas’s GIFs of him twirling like a lethal top, the most graceful dwarf warrior around, I will wager.  And in a few hours, folks will get to see it all on screen in Wellington . . . wow.

I sleep in today after being up until 4 a.m. with various aches and pains. And then I spent the rest of the day trying to catch up with all the Hobbit hoopla whilst keeping my laptop working, which is no mean feat these days–either task, actually.  Didn’t get around to responding to comments until the past hour or so. As always, thank you ladies for keeping the conversations going!

What I also got accomplished was donating to Richard’s Just Giving Fund as part of a fan effort to “bomb” the site with donations just in time for The Hobbit premiere. If you haven’t given yet, consider it, even if it’s only a few dollars/pounds/euros/what have you. Little becomes much when many give it.  Here’s the link below. There are several organizations, including the Salvation Army, Childline, Barnardo’s, and Shelter.

Now, on to Mr. A. and the excitement of that “flying billboard” arriving in Wellington with some of the cast onboard, waiting to be greeted by the rest.

Not a sight one sees every day. My, that stern-looking bearded fellow with the lion’s mane is quite handsome, isn’t he?

Richard–wait–do you realize you are in front of the pack for a change?? Just where you belong and looking delicious! I suppose they told you to stand there . . . 😉

Yummmm. A more close-up view. He does tend to stand head and shoulders above many of his cast members, doesn’t he? 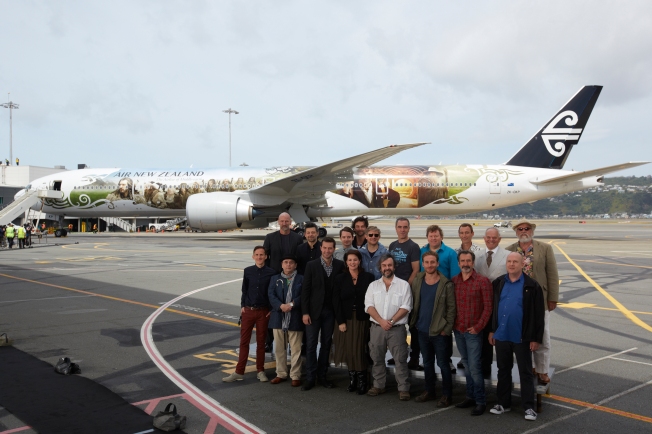 I loved Richard’s look for today, skinny jeans and all (don’t his legs look impossibly long? And great footwear as usual). The vest and jacket combination with the plaid shirt and jeans all worked well together for him.  Yes, he looked a bit more dressed up than many of the other cast members, but nothing wrong with being well turned-out when all those camera are going off. There was nothing flashy that screamed “look at me! I am a superstar” about the outfit. A nice blend of the casual and conservative in which he seemed very comfortable and relaxed.

And here’s a link to a video of the plane’s arrival, with a lovely welcoming  hug shared by Richard with Aidan Turner at the .49 mark. Thanks to Mezz for sharing it.

One suspects these comrades are glad to see each other again and to share in all the excitement of this huge premiere event.

Now what will Richard be wearing tomorrow night (or should I say “who,” assuming it’s designer threads)? Stubble or clean-shaven? (I tend to think he will be clean-shaven).  And what shoes will he be wearing? Is he nervous? Does he have butterflies in his beautifully toned stomach? Is he eager for it to be over? Wondering how audiences will react?  Oh, how excited I am for him.

Richard, I just know you are going to amaze us all. I hope all the fangurlz who got to make the trip have a terrific time. 😀

And I couldn’t resist sharing another version of this pic . . . 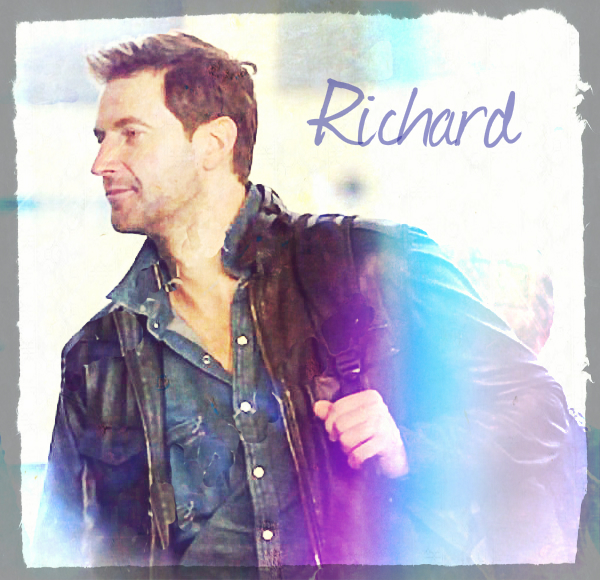