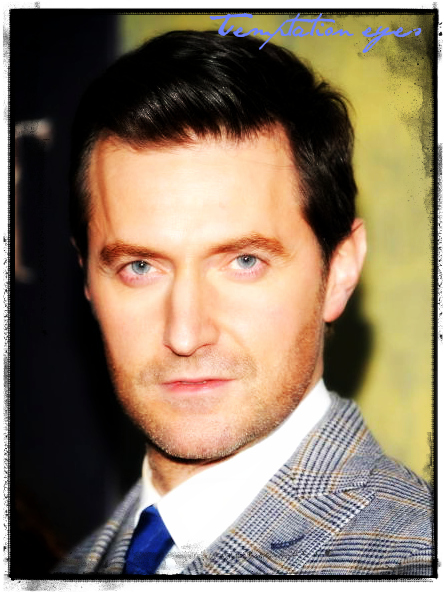 Some images of Richard from Thursday night’s NY premiere of The Hobbit.  He was sporting a three-piece blue-grey and taupe plaid suit with a crisp white shirt and sapphire blue tie. The colors really brought out the blue in those gorgeous eyes. He looked the very proper and handsome English gent. I saw a touch of Cary Grant again.

Unfortunately, there was no live streaming and if it weren’t for the fans and some of the blogsites there tweeting updates, we’d have been in the dark concerning the evening.  Several RA fans who had braved hours in the cold were rewarded when they got some autographs (and a few got pix). Alas, they were rushing the celebs along and they didn’t have much time to interact with the fans.

Those who did get to see/meet him sound pretty starry-eyed! Judging by these photos, it’s so easy to understand exactly why. And I have already re-blogged Frenz’s post featuring the brief video footage she shot of our gorgeous guy, so be certain you check it out.

Apparently the rest of the dwarves were all friendly and personable. I just wish they’d been given a–I don’t know–showier reception.  It was, as Janine said, an unexpected letdown after all the excitement of Wellington and Japan. Apparently, there wasn’t even a red carpet and Franny described the entrance to the theatre as looking like an alley way . . . oh, well. I am certain London will make up for it.

The cast is supposed to be interviewed by Ann Curry on the TODAY show Friday morning. I’ve got the DVR set up to record. I enjoyed Ann’s interview with Sir Peter on Rock Center Thursday night. One or two behind-the-scenes glimpses of RA were also seen. I have to say I love PJ more than ever! What a delightful man. I am so glad Richard had the opportunity to work with a director of his caliber. They make a great team!