In a previous post, we’ve discussed Richard Armitage‘s versatility as an actor and chosen the roles we think best display his varied talents (see link below). So now, let’s discuss, just for the fun of it, some of our dream roles for Mr. A., focusing initially on possible remakes of classic films. This will be the first of several periodic posts on these films and your suggestions and input would be greatly welcomed and appreciated.

I’ve talked before about my dream of seeing Richard take on the role of Atticus Finch, small-town southern lawyer and widowed father in To Kill a Mockingbird, based on the classic Depression-Era novel of the same name. I admit this project is one close to my heart because the novel’s author, Nell Harper Lee, is also a native Alabamian who lives in LA. (Lower Alabama). This year marked the 50th anniversary of the film.

I have also had the privilege to know a real-life Atticus Finch who was involved in one of the murder trials for a slain Civil Rights worker. He and his family received death threats during that ordeal but, like the fictional Atticus Finch, this gentleman never backed down from standing up for what he believed was right. I have a particular admiration for this sort of quiet man who speaks as loudly with his actions as he does with his words.

Atticus is a gentle and caring father and a principled man who refuses to be cowed by a group of would-be vigilantes, determined to lynch the black handyman accused of raping a white woman in the fictional town of Maycomb.

Gregory Peck is much beloved in this role, but I think Richard, who’s proven he makes a great on-camera dad (can’t wait to see him in father role in Black Sky) would be more than up to the challenge of bringing this classic American novel’s central character to the screen again.  Atticus has been described as a “quiet man with strong shoulders.” Remind you of anyone?

Hobbit passes half a billion mark at box office.

[ETA: apologies for the misunderstandings I have created with this post. I didn’t want to discuss remuneration, and so I titled the post extremely ineptly. I simply wanted to remark on the success of the film. I never wanted or want to start a political discussion here. It is my fault for not thinking. Comments now closed.]

I was having a discussion with a Jonas Armstrong fan, and she said something which, as a Richard fan, really surprised me. Well, floored me actually.

This JA fan sees RA as always playing Richard Armitage. I believe she’s seen him as Guy, Lucas, Thorin and Harry (and possibly in other roles) and she said she thought he looked, sounded, and moved exactly the same in all the roles–Guy of Gisborne, just wearing different clothes.

Now, of course, I completely disagree with this assessment, but then she and I clearly have differing tastes in actors and, it would seem, acting styles. Upon this, we agree. 😀

As do we agree everyone has their own tastes and are entitled to their own opinions. And this post isn’t about slagging off on this particular individual, not at all. To each his or her own.

But this thought did pop into my mind and I felt compelled to follow up. And it’s been a couple of months since we’ve had a poll, too. So here’s your challenge, avid Armitage aficionados!

If you were introducing someone to Richard as a performer, and you wanted to demonstrate his versatility and range as an actor, which roles would you choose? Not necessarily your favorite roles, or the ones you think he looks the hottest in, you understand–but three you feel best showcase his varied talents. Which roles would those be?

I have listed twelve of his roles, both starring and supporting, and you can enter your own choice if you don’t see it listed among the choices given.  I would also love input as to why you’ve made these particular choices. Thanks for participating and commenting!

Got my replacement card reader today and thought I would share a few photos from the family Christmas in Birmingham. Some of this offers proof we share the same DNA.  Entered into evidence, these photos of my great-niece A licking the bowl after her auntie SB  finishes whipping up something chocolatey.

She is DEFINITELY related to me. 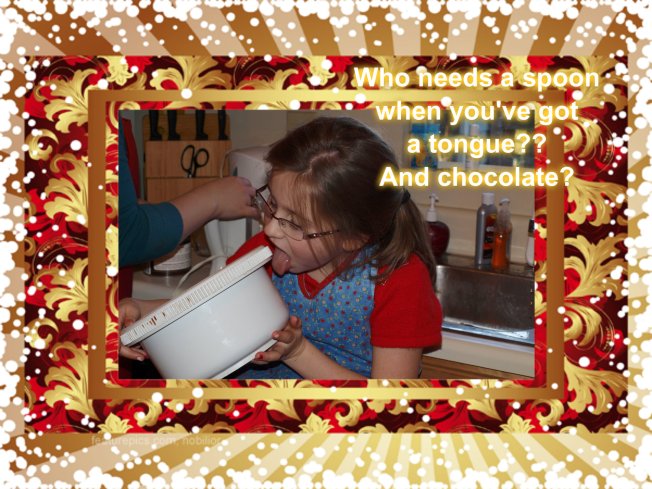 Thirty-plus years ago, a little blonde-haired toddler absolutely adored her youngest aunt’s boyfriend. She couldn’t quite manage to pronounce his name, so she called him “Ben-jie.” And now that little blonde is all grown up and her little girl also adores that tall man with the sweet smile. Maybe one day, that dark-haired little girl’s child will feel the very same–although I am not sure “Ben-jie” will still  be able to lift the little one to touch the ceiling .

Our lovely sixteen-year-old H seems very pleased with those Amazon and Target giftcards. 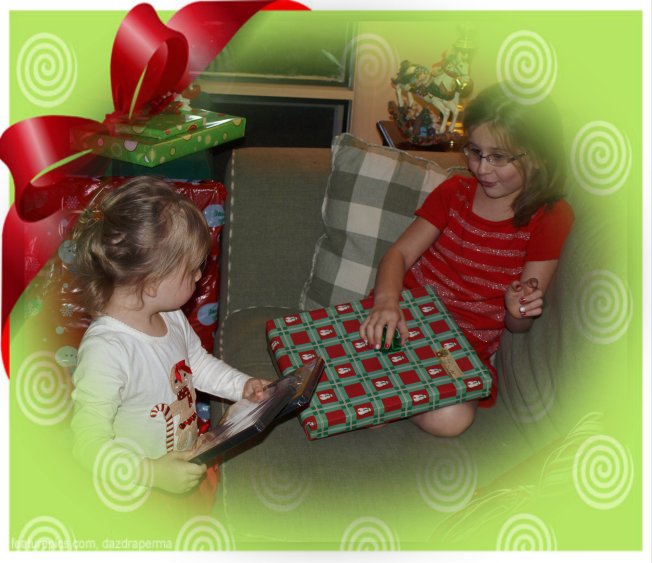 We are all just a bunch of hams. 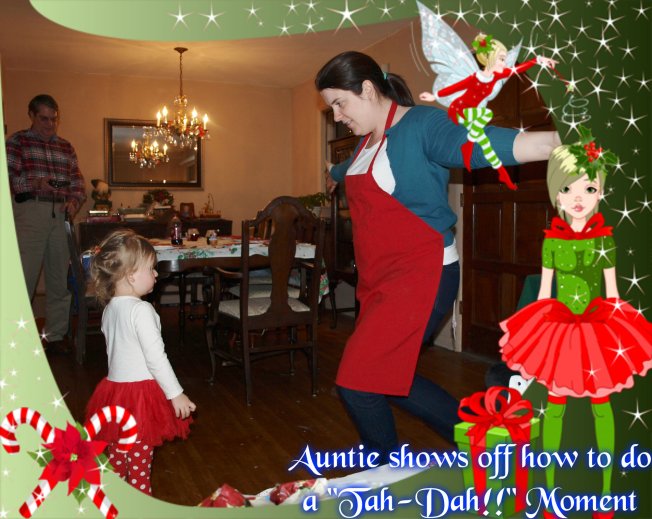 Hope you all had wonderful Christmases with those near and dear to you.