OK, I freely admit it: I’d love to see Richard in period clothing again. He wears it so well. When I listen to radio dramas such as Clarissa and the Heyer audiobooks, it is so easy for me to imagine RA in frock coats and perfectly tied cravats, riding boots and snug-fitting breeches. Call me shallow; it is, indeed, a pleasant diversion.

The Original Hero with a Secret Identity

Before Bruce Wayne/ Batman and Don Diego de la Vega/El Zorro, there was Sir Percy Blakeney, the foppish, foolish British aristocrat who, with the help of a trusted band of fellow aristocrats, secretly helps save souls from Madame Guillotine during the Reign of Terror in the French Revolution.

The Scarlet Pimpernel, the character created by Baroness Orczy in a series of historical adventure-romances first published in 1905, is a master of disguise and escape, a formidable swordsman, quick on his feet and very clever and cunning.

By contrast, Blakeney is a dull-witted, vain, fashion-obsessed creature who takes little interest in world affairs. His beautiful wife, a French actress, Marguerite St. Just,  is unaware of her husband’s secret identity. Circumstances lead him to mistrust her; she, in turn, feels estranged from her cold, dull English husband.

Anthony Andrews and Jane Seymour in a 1982 television adaptation of Orczy’s work. The story is filled with intrigue, blackmail, lust, revenge, romance, adventure and derring-do all set during a very exciting period in history. I could see Richard having great fun with the dual role, really making us believe in the dull-witted dandy Sir Percy as much as the daring, dashing hero, the Pimpernel. And there’s a sword fight!

Leslie Howard and Merle Oberon as Sir Percy and Marguerite in the 1934 Hollywood version of TSP, considered the definitive adaptation by some fans.

In 1922, Rafael Sabatini penned a novel entitled Captain Blood, its 17th century hero a quick-witted Irishman who had served as soldier and sailor before settling down to work as a physician in Somerset. After aiding those injured in the Monmouth Rebellion, Blood is arrested, falsely accused of treason and transported to the Caribbean island of Barbados (Jamaica in the 1935 film) to be sold off as a slave. 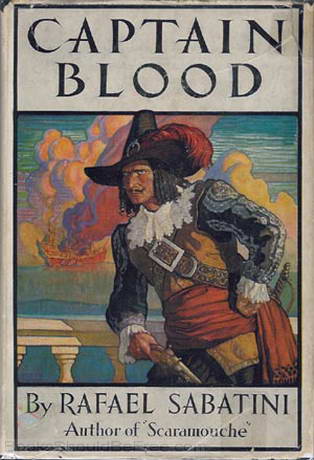 The cover of the original edition of Sabatini’s Captain Blood.

Movie poster for the 1935 film version of Sabatini’s novel.

A wicked plantation owner who purchases him soon discovers Blood’s doctoring skills and he is hired out as a physician, successfully treating the governor for gout. A relationship develops between Blood and the plantation owner’s lovely niece, Arabella, played in the 1935 film by Olivia DeHavilland.  Neither development makes Blood’s owner a happy man.

When Spanish forces attack Jamaica, Blood and other convict-slaves manage to escape. Blood goes on to capture a Spanish ship and become one of the best pirate-buccaneers of the Caribbean. He also encounters Arabella on a merchant ship and duels with a French pirate to win her.  His gentlemanly instincts prevent Blood from having his way with his “prize,” however . . .

Richard would, of course, make an incredibly dashing, charismatic pirate and would be able to out-act Errol, who was appearing in his first high-profile role. This would also be a great excuse for RA to either grow out his hair or get extensions. Because he rocks the long locks . . . and the pirate shirts . .  and those thigh-high boots. 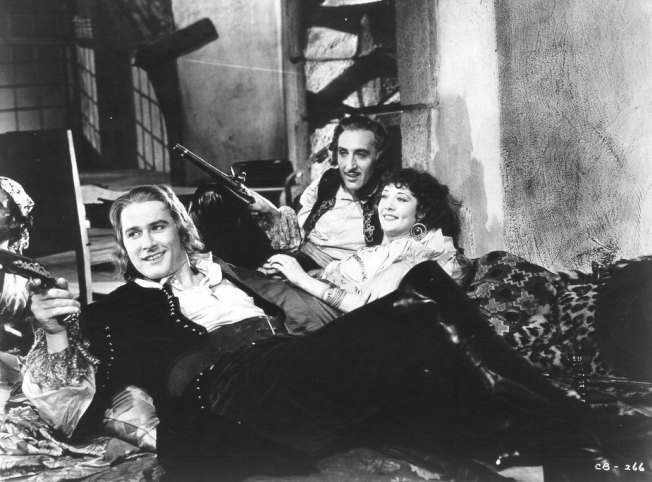 FYI: The character of Peter Blood is actually based on three real-life individuals, Henry Morgan, Thomas Blood, and Henry Pitman, a doctor who was actually caught up in the rebellion, arrested and sold into slavery in Barbados, where he was captured by pirates (although unlike his fictional counterpart, he didn’t join them in their exploits).

These are just a couple of classic film roles in the historical adventure/romance genre I wouldn’t mind seeing Richard perform. A girl can dream, can’t she? 😉