10:10 p.m. and it’s raining. Again. With a repeat performance scheduled through tomorrow and into Wednesday. I jes’ washed my hayah and I cain’t do a thang with it. Ah well, I’ve run some serum through it and am preparing to twist it into pincurls for overnight. I may look like the blonde version of Little Orphan Annie tomorrow, but I am staying home anyway. At least it’s clean.

Good news in the midst of the sogginess and possible Bad Hair Day! I got my FAULT magazine today, direct from–Germany?

“You’ve got a package from–Deutsch Post?” Benny said with a quizzical brow raised as he thumbed through the mail tonight (I hadn’t bothered to slog through the puddles to check the box).

I frowned. “Well, it must–the only thing it could be is the magazine.”

His eyes widened. “Ah. That one.” His lip curled just a little.  “That cost so much.”

“Yeah,” I said with a slightly sheepish smile. “I’ve been wondering when it would show up.”

I tore open the plastic mailer bag and heaved a sigh of relief I’d already been warned a certain hound dog face puffing a cancer stick might meet my eye at first glance. Otherwise, this girl would have been cursing like Porter on a really bad day, thinking those nasty FAULT people had sent Billy Bob instead of the Divine RA.

Turning the magazine over, I gave a little sigh as I looked into the heavily textured visage of my dear Rich.  Mine. At last.

This is my favorite photo. It’s larger in the magazine and those EYES just draw you in. And it happens to be one of two photos with the least amount of photo editing done to them. 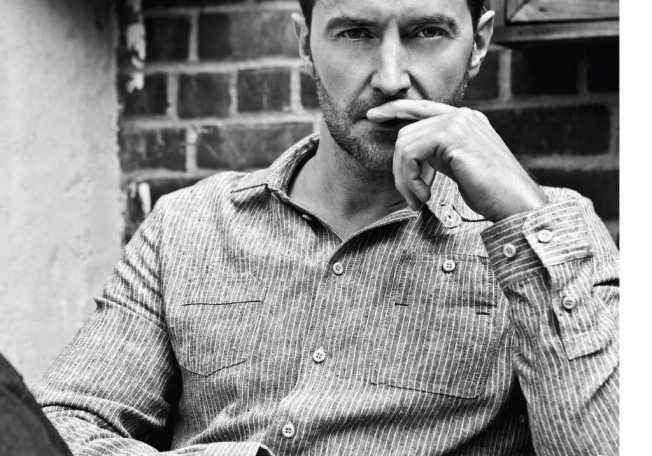 I am just not sure you should tamper too much with gloriously imperfect masculine perfection, if you know what I mean–and I think you do.

And now, on to some fedoralady silliness for Monday night. I finally managed to get a few hours of sleep after lunch but I’m still tired and feeling a bit goofy.  And here is the result, uber-sexy RA as you’ve never quite seen him before. My apologies to Richard and to Robert Ascroft, the fine photog who took the original photo. Remember, I am sleep-deprived . . . have a lovely night/good morning! 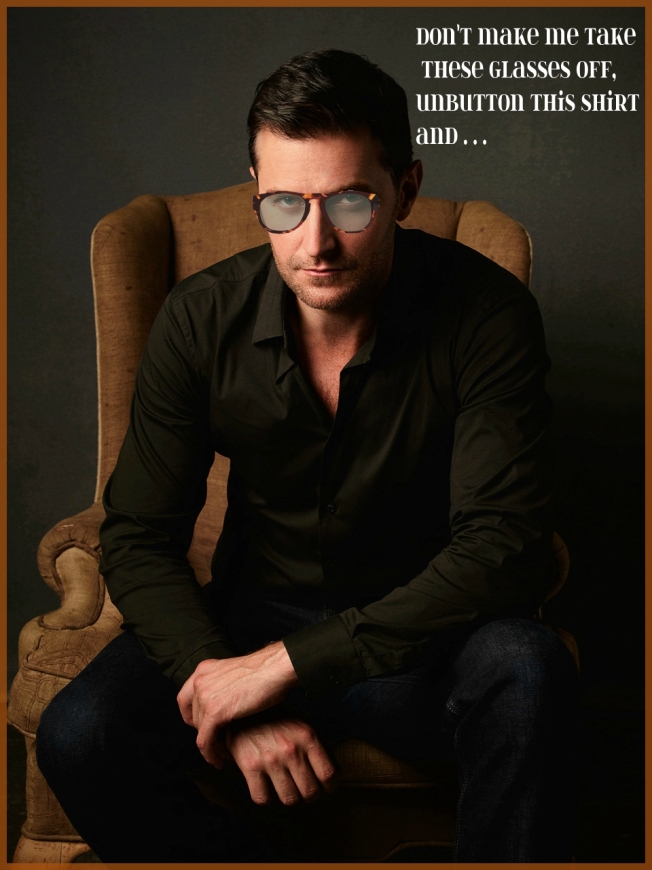 Richard, I don’t that is going to work as a deterrent, dearest. 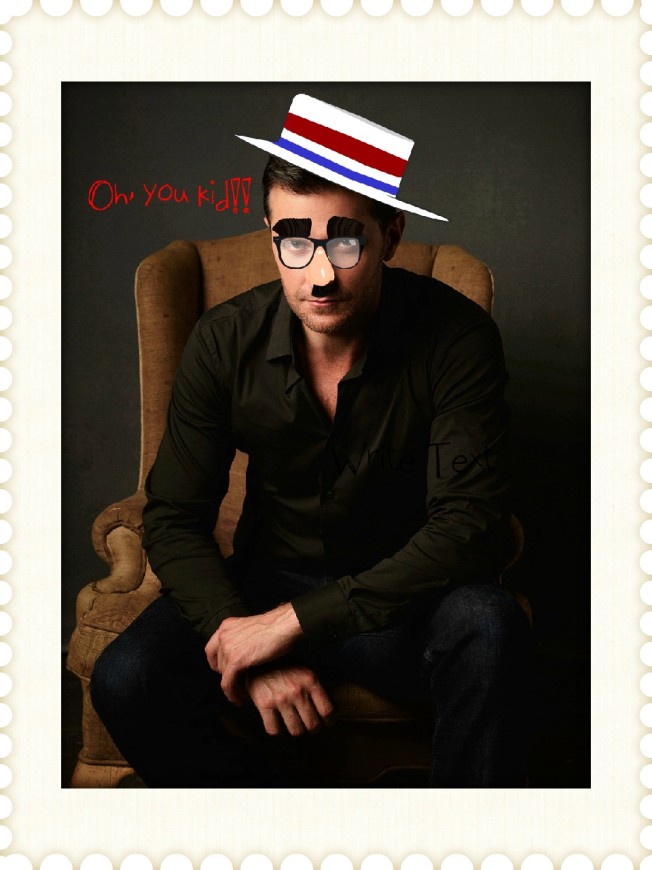 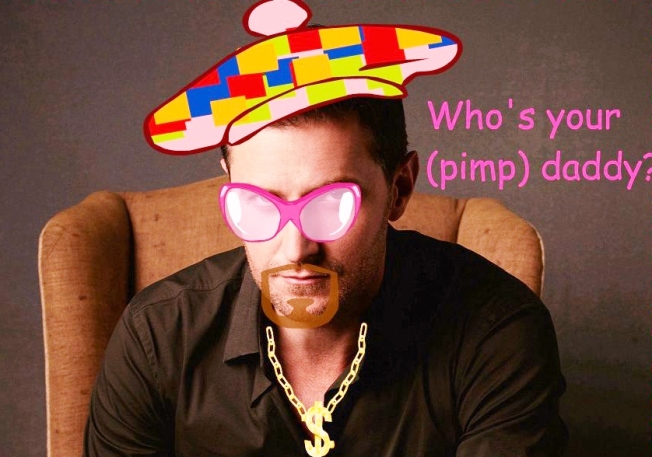 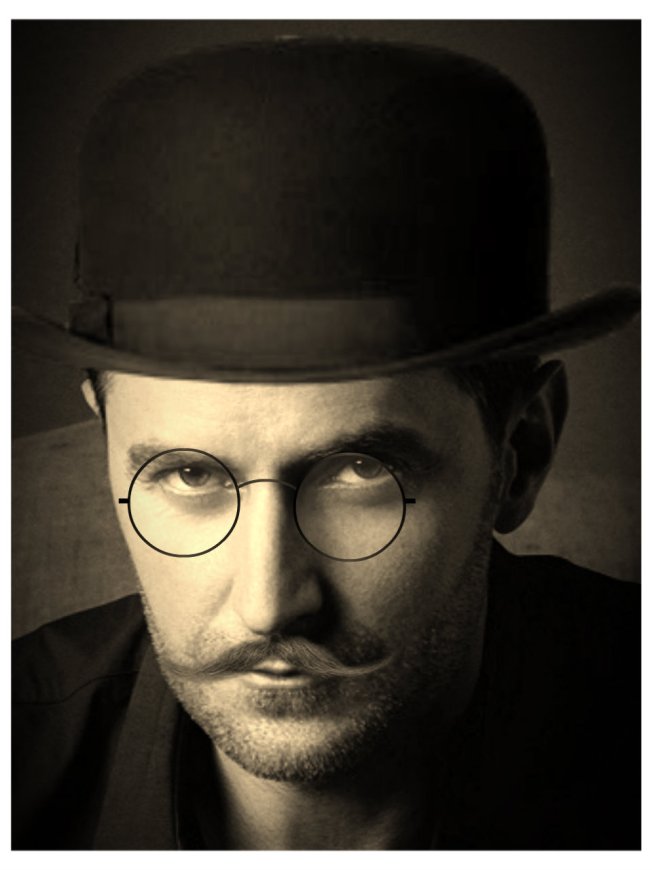 I don’t generally write about politics or religion.  Touchy subjects indeed and I try for the most part to keep things light and breezy.  But sometimes you just have to make your voice heard. 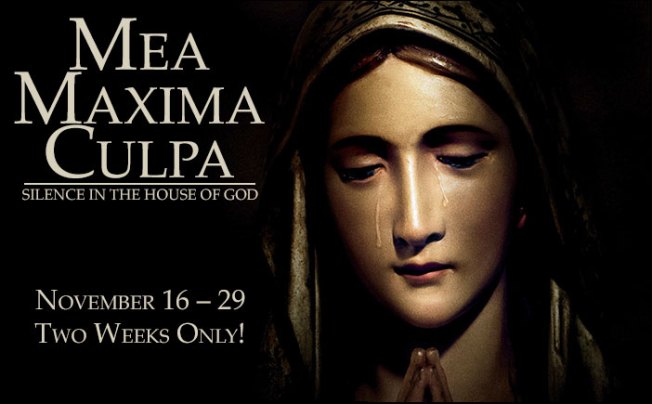 The poster for Mea Maxima Culpa during its theatrical release last year. Courtesy of Bing Images

Last week I saw a documentary I have not been able to get out of my mind. Mea Maxima Culpa: Silence in the House of God is now showing on HBO here in the U.S. The 2012 film by Alex Gibney focuses on a group of deaf men who were abused as children by a priest at the church-run school for the deaf they attended in the 1950s. They were first to openly protest sexual abuse by clergy but sadly, they would be far from the last in a long and frustrating journey right through to the present day.

Well-known actors such as Jamey Sheridan and Chris Cooper serve as their voices as the victims sign their experiences for the camera. We see photos of Father Murphy, round-faced, smiling, and learn that behind that caring facade was a monster who sexually molested somewhere between 100 and 200 boys during his time at the school.  He preferred deaf boys who had hearing parents unfamiliar with American Sign Language. The situation made it less likely they would try to communicate their victimization to their parents. 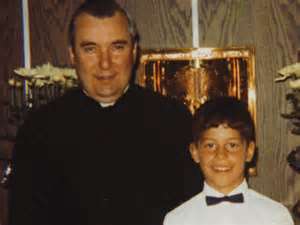 Father Murphy with one of the deaf students. He targeted deaf boys with hearing parents who did not know sign language.

Murphy later justified his odious behavior by saying it provided helpful sex education for the boys, and practically patted himself on the back for “taking their sins upon myself” by bringing them to climax. While he admitted to his acts, he never admitted to doing anything wrong. He was eventually removed from the school for the deaf, but for “health reasons.” Instead of being defrocked, Murphy was sent to a parish to serve as their priest. And yes, he continued to sexually molest young boys.

In the documentary, we do see the Catholic Church’s various, largely unsuccessful attempts to reform pedophile priests over the years, including plans at one point to put them all on a private island to be purchased by the church (that idea was eventually dropped). We hear from those who tried to work within the system to see priests committing criminal acts brought to justice, often to little or no avail.

It seems there was far more concern shown by The Powers That Be over protecting the “poor” priests and the reputation of the Church, rather than trying to help those victimized by the molesters.

I do urge you to see this documentary if you have the opportunity. It is disturbing and riveting and powerful, a cautionary tale of the abuse of office, of institutionalized corruption, practiced over and over and over again against some of the most vulnerable of our society.  It is not easy to watch but it needs to be seen. It both broke my heart and made me angry, but I don’t regret watching it.

I have no intent or desire to vilify the Catholic Church or to get into an argument over religion. But it seems through their actions–or in many cases, inaction–in dealing with the horrific criminal acts of their very own, they have managed to vilify themselves.

And so when I heard this morning that the Pope had resigned, I was somehow not that surprised. Perhaps it is solely due to health issues making travel difficult; perhaps there is more to it. I don’t know, but some say there are no coincidences.

I do know this: when evil takes place, no matter where it takes place, and we know it’s taking place,  we cannot and should not be silent.

Or can you see a hint of chest hair sprouting up at the opening in Mr. A’s very flattering loden green shirt? Do you feel the need to do further exploration, maybe undo another button or two . . . lightly run your fingertips across that jaw, the stubble grazing your skin, then through his soft-looking hair, rumpling it just a bit? Do you think about noshing on that alluring column of throat, inhaling his masculine scent?

Oh heavens, Mr. Armitage, what the sight of you can do to a mild-mannered, happily married woman.  I really must try to go to sleep now.  Not sure if this is going to help . . .

But I just had to have a peek. 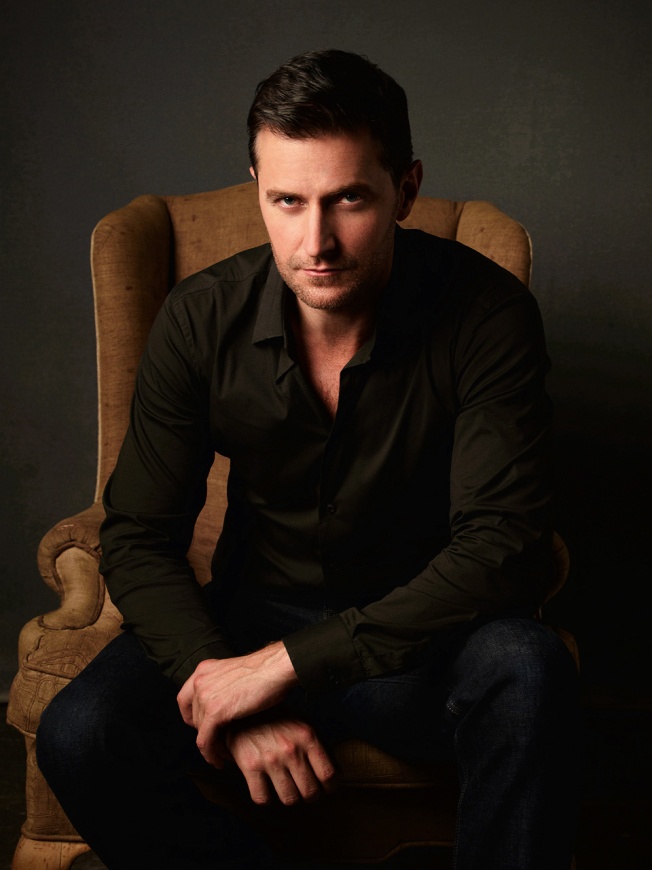 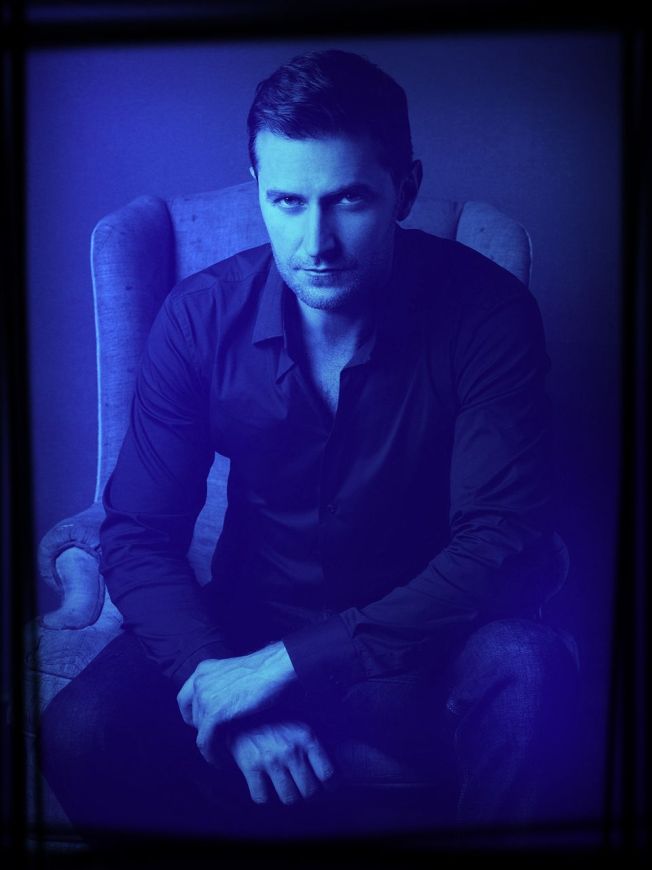 It’s raining here . . . and it’s supposed to rain through the day and the night and tomorrow and tomorrow night and finally. maybe, taper off on Wednesday. Not surprisingly, we are under a flash flood watch. One of those times I am glad I live on a hill, Pecan Ridge, to be exact.

Pecan Ridge is also the name of our fledgling video production company. Yes, this is one of the other projects I’ve hinted about recently.

Benny has actually been making very professional-looking commercials for the car dealership for quite a while now, as well as producing videos for use in arts council productions and filming the productions themselves. He’s also done some other events–and he’s good at it. He says I am the creative one of the two of us, but that’s not true. He’s just modest, as well as smart and talented and adorable. Not that I am prejudiced or anything.

Now we are getting ready in the next few months to launch our own business with his (soon to be retired) co-worker, a fellow video enthusiast who has been filming a number of sporting events over the years and has helped Benny with a couple of his projects.

I will be learning Adobe Illustrator and more about the whole process of video editing, as well as doing some videography and shooting still photos at various events. And who knows? You all may benefit from what I learn. I might make a “real” RA fanvid! 😀 We’ll be creating a website for Pecan Ridge Productions later, too.

I will also be working on the children’s book. I have my notes taken and now I need to tackle putting the story in language a young child can grasp and find interesting.  And there’s my novel. Leigh, my beta and muse, and I have been talking about that again. Guy and Lizzie’s story must be told.  Nobody’s saying it’ll be a runaway best seller, but at least whatever I produce, I won’t be ashamed that I “sold out” along the way just to make a buck.

And, of course, I will be blogging. TAE will march onward!

And now, more of RA Blue Monday on this wet and stormy early Monday morn . . . 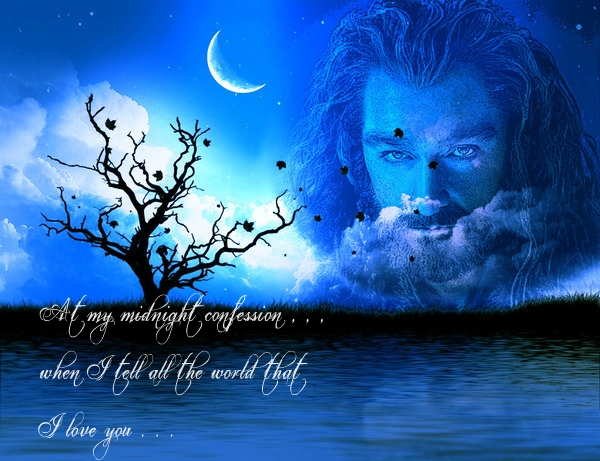 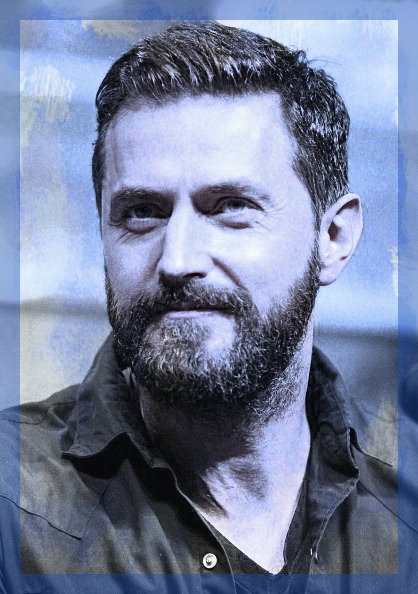 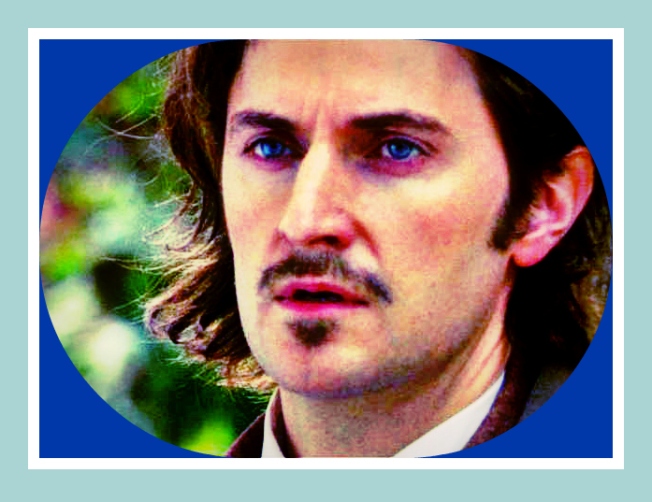 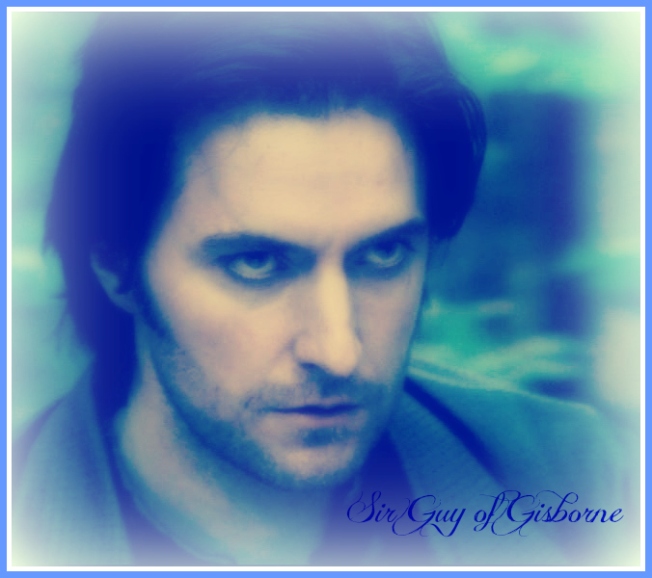 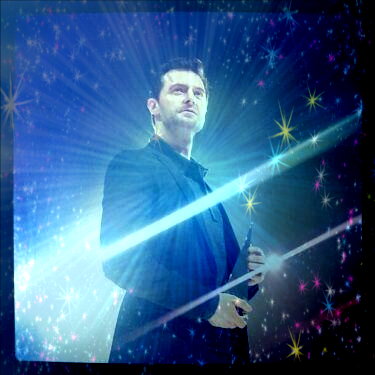 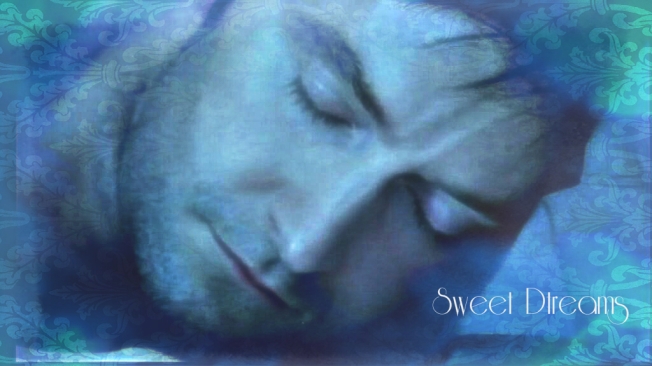 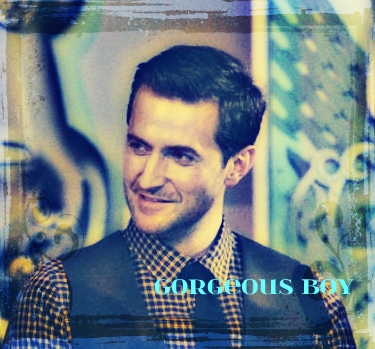 Those keen, beautiful, kind blue eyes, the ready smiles, the thoughtful, modest manner, the slightly goofy laughs, the sweetness, the flirtiness–oh, RA, you are adoRAble! 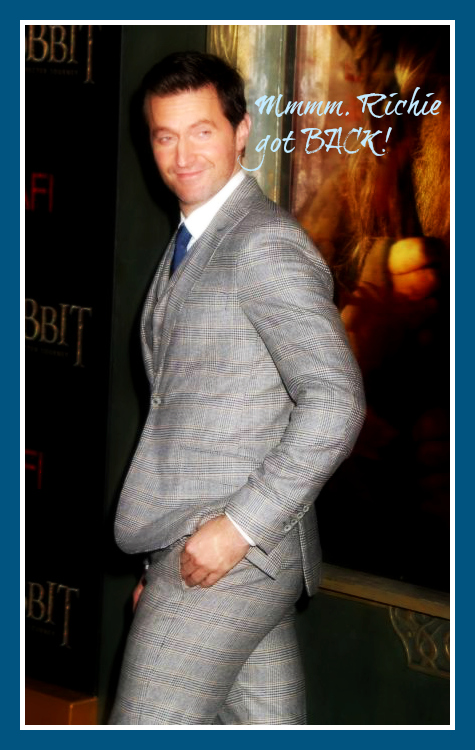 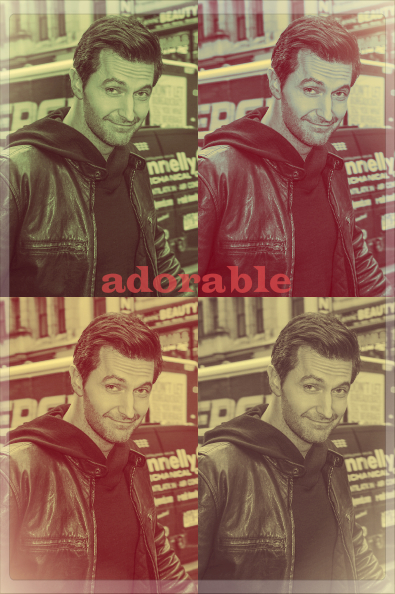 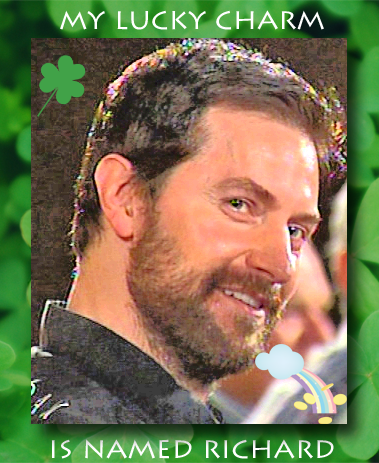 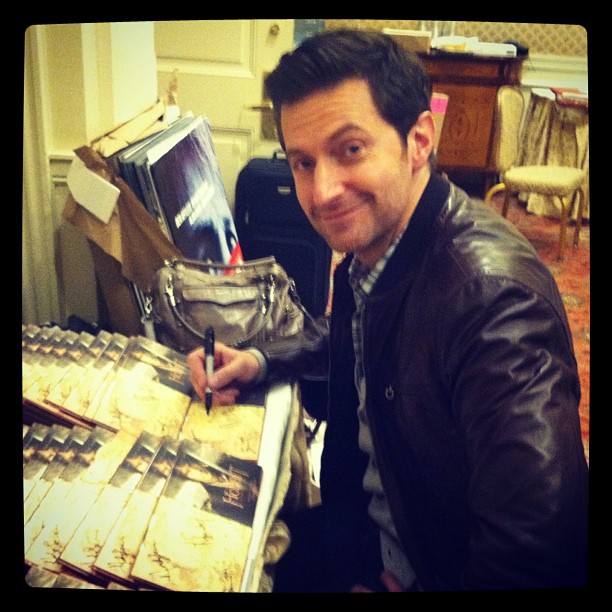 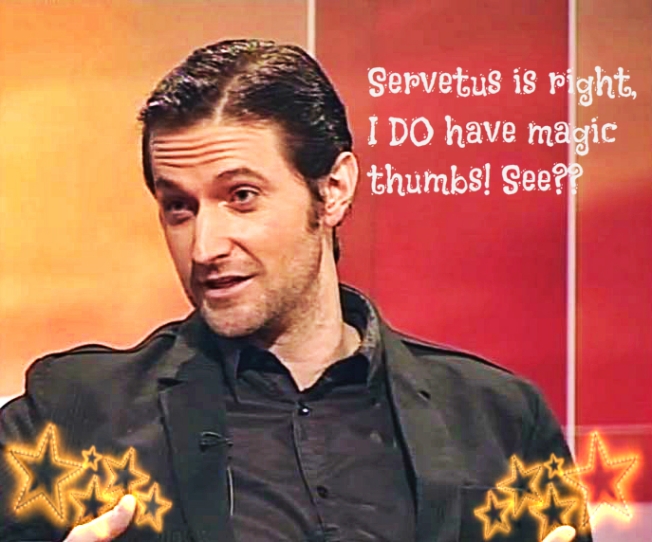 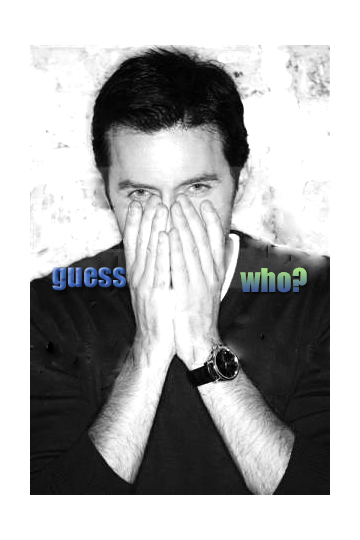 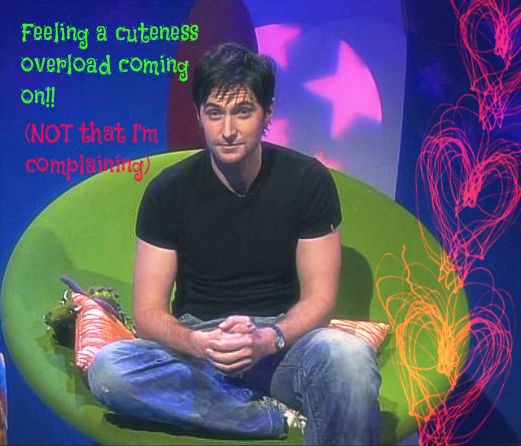