A scene at Killough Bay in County Down, Northern Ireland. My maiden name is “Killough,” and we know an ancestor named David Killough journeyed to the American colonies in the mid-18th century from Killough, later serving in the Revolutionary War.

Long before that, it appears there were the McCellaughs and before them, the MacKellochs, who lived in Scotland and eventually emigrated to the Emerald Isle. The name “Kellogg” as is Kellogg’s Corn Flakes, is said to be a derivative of Killough.

There was once a manuscript my father had some genealogist compile detailing a good deal of family history (including an Indian massacre of a group traveling by wagon train to Texas), but it has long since disappeared, I am sorry to say. I have always enjoyed history and hearing family stories. And as I get older, I find myself more intrigued than ever to know the story of those who came before me.

I would love to go to Ireland one day and visit Killough. I felt so at home when I visited England more than a decade ago; I wonder, would that feeling be even deeper and more profound if I found myself walking the same earth my ancestors had once walked?

The lighthouse at Killough Bay.

The ruins of St. John’s Church near Killough.

A shot of Killough Harbor.

Love the drama of the sky and sea here. 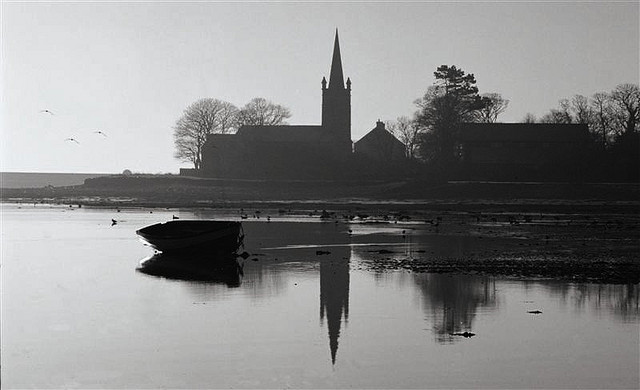 Yes, one day I would like to be able to shoot my own photos in Killough. It’s on my bucket list. 😀 Happy Saint Paddy’s Day!