DJ at Heirs of Durin has posted the extensive article featuring quotes from all the principal BOTFA actors and several photos I haven’t seen before. Click on the link to see it:
http://thorinoakenshield.net/2014/11/28/empire-magazine-farewell-to-middle-earth-issue/#like-21067 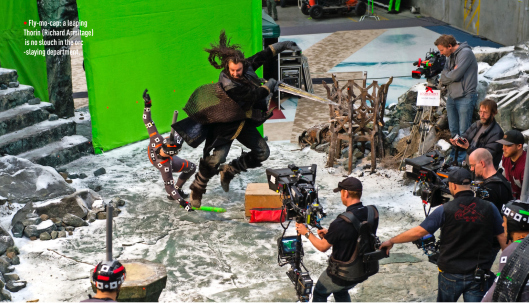 He flies through the air with the greatest of ease. BTS photo of RA battling stuntmen in gimp suits representing orcs–from Empire Magazine.

OK, I confess. First thing, I always look for any quotes from and/or mention of RA in these stories. Then I read what it has to say about the other actors.

While I am at it, let me confess to something else: no offense meant to Evangeline Lilly or Orlando Bloom, but when I see previews of upcoming holiday films and their names, along with Martin and Sir Ian, are included amongst the stars of BOTFA in bold print–and Richard’s isn’t–I am major-league irritated. Call it Armitage Protection Mode if you well; call it the fact I have been miserably sick the last few days and am feeling more prickly than usual, but Thorin and the actor who plays him are simply more important to these films than those two are.  Martin as Bilbo may be the heart of the trilogy, but Richard as Thorin is the soul.  Thorin is described in the article as “the catalyst for conflict” for the final film.

The Empire writer, Ian Nathan also refers to Richard as the actor “arguably giving the performance of  the trilogy.” There is also a mention of how Armitage clearly loves “the dark juice of his character.”

One of five covers for the December issue of Empire. I like it. 😀

And we all know he does dark and juicy well (Sir Guy is lounging in the corner, one saturnine brow raised and a smirk crossing his stubbled face. “Indeed,” The Dark, Juicy Knight purrs).

I am beginning to look forward to the film more than earlier–I have had conflicted feelings about the final film, and the need to say goodbye once more to a beloved, charismatic Richard Armitage character. I know that he will give a fantastic performance and I will need to get out the handkerchiefs. He may not receive a single award for all his hard work and artistry and commitment to the character, but it won’t be because he doesn’t deserve it.

And of course, just like Guy and Porter and Lucas and Proctor and any other of his characters who have “officially” shuffled off their mortal coils, Thorin will be So Not DEAD.

As Guy can tell you, it’s a pretty sweet deal.

Another post by DJ with yet another interesting interview with RA, including his approach to playing Thorin’s dragon-sickness.

Billy Boyd aka Pippin in the LOTR trilogy performing final song in BOTFA–a goodbye to Middle-earth . . . featuring scenes from all six films. *sniff*

Hey, It’s Sir Guy week at SpReAd the Love! And I had to share some kindnesses done for me this week. What about you? Have you given/been the recipient of a kindness this week?

Our first week of STL Gives Back was amazing! Thank you all so much for all the kindnesses that you submitted and, in case you missed it, our winner was Kitty who’ll be getting a paperback copy of In Consequence by Trudy Brasure. Thanks to everyone who entered and a special thanks to Trudy for donating a copy of her novel!

Our giveaways are all fan made items inspired by some of Richard Armitage’s most popular characters. This week’s giveaway, a jet and paper bead multi-strand bracelet, was inspired by Guy of Gisborne and is handmade by me. I’m still finishing it but as a preview, these are some of the materials I’m working with.

Jet beads and parchment paper. Hmmm, how could that say Guy of Gisborne?

Okay, again leave a comment with a kindness that you’ve done or that’s been done for you and your name will be entered into this…

Found this on Pinterest. Would love to have one in a long-sleeved version . . .

I just saw the latest TV trailer for BOTFA. Not a lot of Thorin, but, oh! That scene where he turns his eyes–those beautiful, expressive eyes–to his company, and asks, “Will you follow me, one last time?”  And that lump comes to my throat again and I feel the sting in my own eyes.

Found on Pinterest. Not my edit, and not that scene to which I referred, but the expression captivates me.

Of course I will follow, my king. You may be a dwarf (but what a charismatic, majestic and beautiful one!), and I, a mere human, and completely useless with a sword or axe or bow and arrow, but I will follow. Heck, you might actually be a fictional character, but your CReAtor made me believe in you, believe in your quest, agonise over what is to come for you, the returned King Under the Mountain, and your kinsmen.

I know Peter Jackson has complete faith in the CReAtor’s ability to bring you to life, with all the lights and darks of this complex character, deeply flawed in some respects and yet so kingly, so admirable and so easy for us to follow both in spite of and because of it all.

This was one of my vocabulary words for the day delivered to my inbox this morning, and it struck me as an apt description of what RA achieves with his acting:

chiaroscuro: In painting, the use of deep variations in and subtle gradations of light and shade, especially to enhance the delineation of character and for general dramatic effect. Rembrandt was a master of chiaroscuro.

(Dictionary.com’s Word of the Day)

Richard is the master artist of the detailed character; we learn to appreciate the subtle and varied shading of emotions he delivers from his palette. From a wistful remembrance of past glories to a fellow relaxed and enjoying a hearty meal with his family and comrades . . . 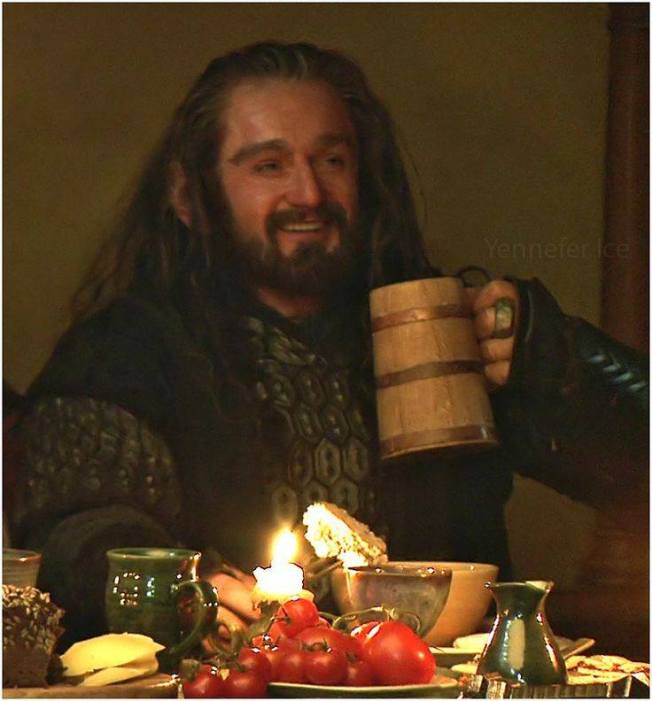 From the proud and fierce warrior, always ready to enter the fray . . . 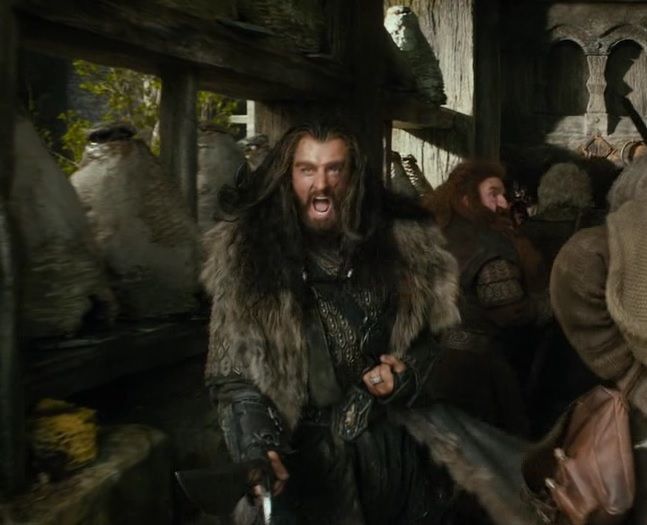 One who can express a myriad of emotions with the flicker of an eyelash, a tilt of his head, the tightening of that jaw–silence speaking of an inner storm.

He’s an amazing actor and, I believe, a wonderful human being to boot. And so, dear Thorin, I will follow you into The Edge (local theater) with my Kleenex in hand in a few weeks. And Richard, although I have short breaks away from you due to work projects, health issues and money woes (we had limited/no access to internet for the past 10 days due to the la), I keep coming back. There’s just something about you . . . 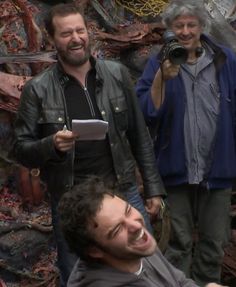 And I swear, it’s not just the tush. Although it’s Grade A like the rest of you (inside and out). 😀

Oh wow! Stunning HD screencaps (Including several with Thorin) available before the trailer goes online today! Thank you, DJ for sharing these! ❤

It hurts my heart I don’t have money to give to charities this year due to medical expenses, but HEY kindnesses, I can certainly do and so can you! Read on . . .

So Obscura and I have been chatting again and you all know what that means: another SpReAd The Love challenge. Before we get to that, though, we have a couple of things we wanted to talk about. First, as you can see, we have a new space. It wasn’t impossible for us to coordinate posts on two different blogging platforms but it’s definitely easier with my move to WordPress a couple of months ago.

Second, we still have $150US from our Anonymous Co-Conspirator to be matched from the IntoThe Stormchallenge. A $50 donation was made to Doctors Without Borders and we’re part of the way to the $50 donation to the International Red Cross. We’d love for our Co-Conspirator to write that check sometime soon, and then another check for $100 to one of the charities supported by  Richard Armitage via JustGiving, but to get there we…

Mr. Armitage has the power to make me as happy as a fluffy kitten with its favorite toy.  Just sayin’ . . .

I was on the run, caught in a maze of long, crooked, dimly light corridors, trying to get away from the faceless guy who was chasing me. I swung around a corner when a secret panel popped open in the grey wall. Bill Nighy stuck out his head. “Here, use this,” he said in a whisper, before handing me a stack of yellow Post-It notes and disappearing as the panel closed. I threw the notes at my pursuer and—-

Wham! I woke up cocooned in my bedclothes on the floor. This happened a couple of nights ago.

The fall didn’t do any more damage to the wrist, which has made a marked improvement since the injection almost two weeks ago  (for this, I am most grateful). However, the old pleurisy adhesions which had already been plaguing me, plus a new condition I believe is costochondritis (a painful inflammation of the cartilage connected to the sternum) didn’t much approve of my nocturnal exploits. Let’s just say I’ve had an uncomfortable couple of days.  This, too, shall pass.

Why I dreamed about Bill Nighy (a favorite character actor of mine, but I haven’t seen him in anything recently) and sticky notes as a weapon, I have no idea.  I think the whole thriller scenario and being chased has to do with too many bills and not enough money. At least they haven’t literally starting chasing me; the phone, email and snail mail messages are quite enough, thank you.

Richard Armitage, I’m hurtin’ and feelin’ old and tired and so broke I can’t afford to pay attention . . . take me away. The muscle relaxers and aspirin can only do so much to soften the pain and lift my spirits.  The heating pad helps, but it’s not anywhere close to being as appealing as y0u, alas (maybe if I had a cover with your photo on it? Hmmmm . . .).

And even if can’t afford to indulge in DVDs and books and other Armitage-related stuff this year the way I would love to, oh, the goodies I can snaffle from FB, Pinterest, fellow bloggers and other places. Armitage fans believe in sharing the wealth, bless their besotted little hearts.  Some of my recently found favorites . . . Richard’s glorious smiles in Thorin’s guise, the ponytail and crinkles, the Tongue of Concentration, the humor,  the focus, the sweetness, the hands, the EYES.  It’s all good. I may be in physical pain and feeling stressed and worried, but I can and I do also count my blessings . . . and one of them is Richard Armitage. ❤  There’s bang for your buck even when you aren’t spending any bucks! 😀

From Zan. I mean, really—-don’t tell me WB can’t afford to send all the dwarves to the London premiere.

I’ve been thinking about this for quite a while. This may come across as a stream of consciousness piece, but here goes …

Why aren’t all the Dwarves, Kiwi and every other nationality, being invited to the World Premiere of the final chapter of their work?  Why are people who weren’t connected in any way with this trilogy being treated to this honor?  If the first is due to “budget concerns” as was suggested,  then the latter should not even be presented as an option.  Or am I being naively simplistic in my reasoning?

I don’t have any fancy charts or nimble number play, as seen here (nice work, Frenz and AB) and on other sites throughout the fandom.  I’m not that talented.

What I do have is a sense of fair play that is confused.  And even angry. Confused because these men worked hard and long to bring the vision of…