“You’re writing about me again.”

There was such underlying warmth mixed with surprise and–was that the faintest hint of reproof?–in that deep rumble of his.

He was sitting there at the foot of her bed, that glossy raven head tilted to one side quizzically,  hands clasped around one bent knee folded casually across his leg. A dark knight from a different age decked out in his version of fancy-dress: well-worn, boot-cut jeans encased those never-ending pipes of his, a black V-neck t-shirt and a black leather jacket.  His trademark stubble was heavy enough to be called a beard and there was just a hint of kohl encircling those bottomless blue eyes. 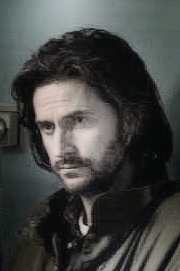 She wanted to fling her arms around him, bury her face in that broad chest and breathe in his scent. Leather,  sandalwood soap and–chocolate.  Instead of embracing him, she leaned forward and ever so gently brushed his chin with her fingertips.

“You’ve been into the chocolate animal crackers again, haven’t you, Sir Guy? If you’re going to keep that rather fetching beard, I shall have to buy you a brush and comb for it, I suppose.”

Sir Guy caught up her fingers in his hand. So warm. He radiates warmth.

Turning her hand over, he raised it palm upwards to his mouth. His eyes closed, he pressed kisses, light as gossamer, to the surface of her palm.

“Perhaps–we’ve missed each other, Ladywriter?”