It’s been said that blondes have more fun. I like to think I’m a pretty fun kind of gal.

However,  it’s also often been said that they–we–aren’t the sharpest tools in the shed.

On one hand, blondes have been seen over the years as sexy, desirable and glamourous. I can live with that.

Gentlemen,  author Anita Loos told us, prefer blondes (even if they marry those more serious-minded brunettes and redheads). 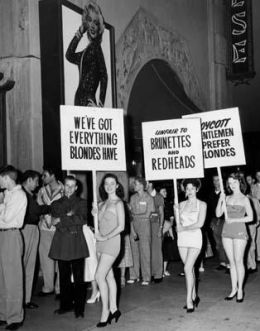 But we also have the reputation for lacking both common sense and academic intelligence. Hence the stereotype of the dumb, ditzy, daffy fair-haired female.

I discovered a while back that quite a few online friends who didn’t know what I looked like assumed I was a brunette. Some seemed almost shocked when they discovered I wasn’t.

OK,  thanks to L’Oreal, I help it along these days. Still, a blonde of one shade or another I’ve always been.

The reaction over my hair color startled me a little. Why were readers surprised to learn I wasn’t dark-haired? Could it be they had unconsciously bought into the classic dumb blonde stereotypes? 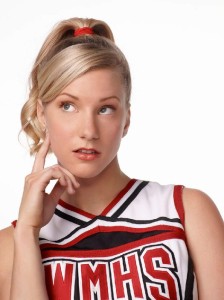 Heather Morris as Brittany, the infamous (and hilarious) dumb blonde cheerleader on “Glee.”

Why are the fair-haired seen as stupid?

While surfing online, I discovered a few theories.

Take a look back to the times of the ancient Greeks and Romans. They admired their fair-haired neighbours to the north. And so they (particularly prostitutes) bleached their hair, but without the safety precautions we have in place today.  Copious amounts of bleach rubbed into the scalp and inhaled could have had deleterious effects on one’s mental faculties. Could this be the origin of the “dumb” blonde?

Another theory takes us back to the days when the high-born protected their delicate skin while the peasant folk spent long days toiling in the fields, tanning their skin and lightening their hair beneath the hot sun. Fair hair (and tanned skin) thus became associated with the uneducated–“dumb”–lower classes.

There is also the story of a certain French courtesan, Rosalie Duthe, who was satirized in a 1775 play Les curiosities de la Foire for her habit of pausing a long time before speaking. Thus Duthe appeared not only stupid but literally “dumb,” as in mute.

And then along came the cinema, which allowed blondes to open their mouths and prove they were dim bulbs.

Think of iconic silver screen bombshells such as Jean Harlow and Marilyn Monroe and Monroe clones like Jayne Mansfield and Mamie Van Doren. From across the pond we had the voluptuous Diana Dors. Most of these ladies didn’t necessarily start out with fair hair but went the peroxide route to achieve sex symbol status. They were goddesses of the silver screen, but they weren’t exactly worshipped for their brains, if you know what I mean. 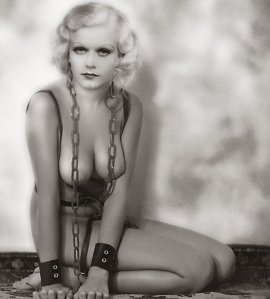 Jean Harlow, 1930s bombshell, who played the quintessential dumb blonde in the classic “Dinner at Eight.”

The most iconic of the platinum blondes, the often imitated, but never duplicated Norma Jean Baker, better known as Marilyn Monroe. 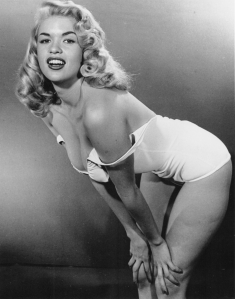 Jane Mansfield, who poked fun at her voluptuous blonde image in “The Girl Can’t Help It.” 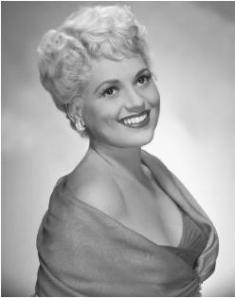 Judy Holliday, the perennial dumb blonde in comedic roles in classics such as “Adam’s Rib.”

A rather sweet and demure-looking young brunette Diana Dors. 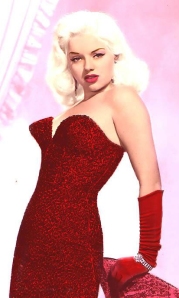 And the dumb blonde continued to appear on-screen when television came into every living room. As a child, I remember seeing giggly, goofy Goldie Hawn as the dumb blonde on Rowan & Martin’s Laugh-In, and later, wide-eyed innocent Chrissy Snow on the popular sit-com Three’s Company.  And more recently, the vapid heiress Paris Hilton perpetuated the stereotype of the dumb blonde. 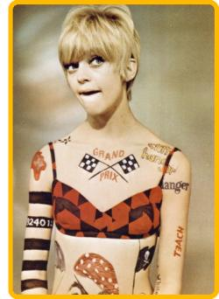 Goldie, the adorable dumb blonde as Bikini Girl on “Laugh-In.” 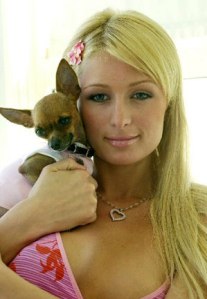 Paris Hilton, who once pondered whether Wal-Mart only sold walls. 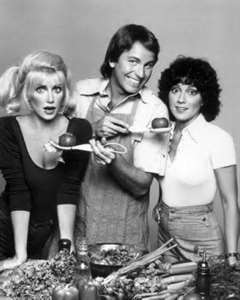 One of my favorite dizzy blondes has to be the unforgettable Alice, the vicar’s sidekick as played by Emma Chambers on The Vicar of Dibley.  I’ve even written her into some of my fan fiction.  Yes, the daft, dizzy, dumb blonde image is alive and well here in the 21st century, seen in movies, television, cartoons, books and endless jokes, and even in  merchandising (and no, I don’t use Dumb Blonde hair products).  So I have laughed at, and with, certain “dumb blondes” over the years.  I’ve even poked fun at myself, saying from time to time, that I am having a “blonde moment.”

Emma Chambers as Alice in “The Vicar of Dibley.” 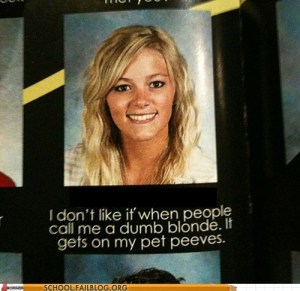 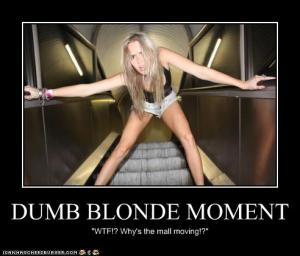 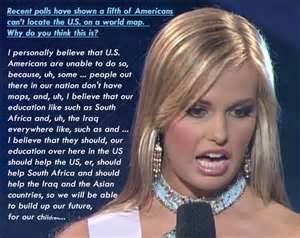 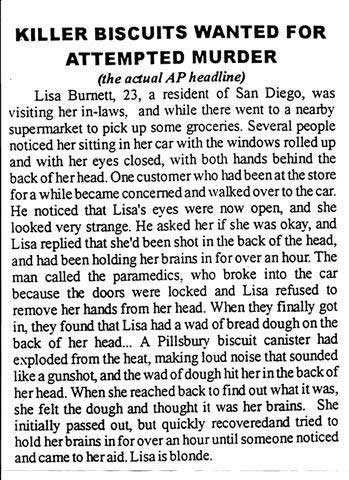 But I don’t truly think of myself as dumb. Scatter-brained and absent-minded at times, but not dumb.

And I guess others who didn’t know any better never thought I was either.

As I said, I came into this word a blonde. OK, I was actually born bald. But the hair soon came.

I promise this is the one and only time I will foist full nudity (my own or others) on anyone’s delicate sensibilities. You can see the blonde hairs beginning to sprout on my infant head.

I was typecast in school productions and Christmas pageants due to a rather massive amount of blonde hair, playing Gretel and a Dutch immigrant and scads of angels complete with  tinsel-wrapped wire coat hanger halos and flowing white robes. Fair hair is also often equated with innocence and angelic qualities, it seems. OK, looks can be deceiving. 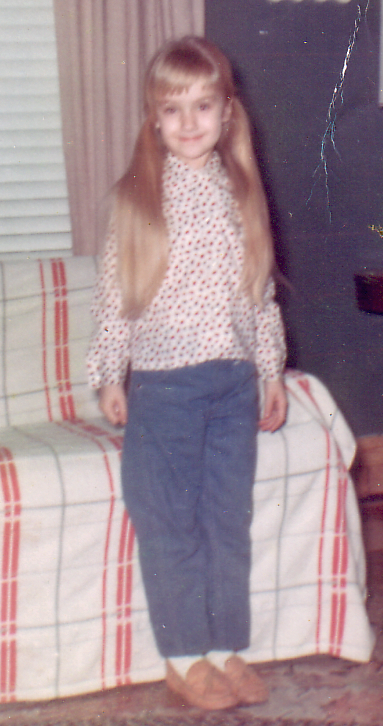 No one ever told me when I was child that my golden tresses somehow equated a less-than-stellar intelligence level. Of course, the fact I had to start wearing spectacles in elementary school, short-sighted from pouring over books night and day, seemingly contradicted the idea I might be a dumb blonde. Because kids who wear glasses are the smart ones, right? I mean, they always were in TV shows and movies and in books . . . and the thicker the glasses, the brainier the child. And mine just got thicker and thicker until I was liberated by contact lenses at 15. 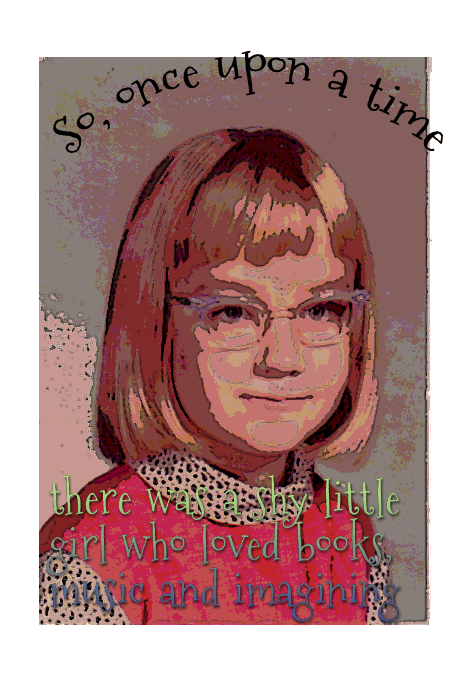 My third grade school photo. The first of many pairs of glasses I would wear.

Yet, the smart kids in the movies and cartoons always seemed to sport dark hair with their eyeglasses. Not blonde.  Unless, of course, they were diabolical little psychopaths like Rhoda in The Bad Seed.  Oh, Rhoda didn’t wear glasses, but no one could accuse her of being stupid. A conniving murderess, yes. But not stupid. 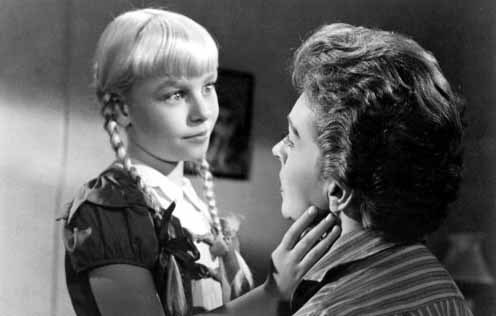 Patty McCormick and Nancy Kelly as the evil little pig-tailed Rhoda and her mother in the 1956 film “The Bad Seed.”

Note the long blonde braids and bangs (fringe). I was teased mercilessly for my resemblance to nasty little Rhoda. *sigh*

And so I seemed to be a contradiction. I was considered one of the smartest kids in my class and yet I was undeniably blonde from the top of my tow head to my eyelashes and the hairs on my arms and legs.  I was a quiet, somewhat serious bookworm. Was I actually a brunette soul beneath my blonde facade?

I went on to graduate second in my high school class and with honors from college. No one ever seemed to treat me like a dumb blonde. I did earn the nickname of Snow Queen in one of my art classes, but that was due to my coloring, not a frosty (or  Chrissy Snow-style dumb) demeanor.

My hair got darker with age and I highlighted it, until God started adding lots of touches of platinum blonde and the highlighting didn’t work anymore.  So I had to revert to overall hair color. Otherwise, I’d have had looked a bit like a blonde skunk.

Now it’s getting , er, more and more platinum, so it’s hard for me to be much of anything but blonde, unless I want to look even older than I actually am. Or I want to have some seriously pale roots to constantly touch up after coloring my hair a darker shade. I can always don my wig if I feel a deep need to go to the dark side.

I do play a brunette every once in a while. Me in my Halloween costume a few years ago.

Of course, “God’s platinum blonde” is supposed to designate wisdom, isn’t it? Perhaps I am grower brighter with age . . .

And this week, we’ve learned an English teenager named Lauren Marbe has scored an IQ of 161.  Keep in mind an average IQ is generally thought to fall between 90 and 110.  Guess what color her hair is?

Seems her teachers knew she was bright from her schoolwork, but they never thought she was a genius–you know, the whole “dizzy blonde” thing. She’s into manicures, tanning and parties. Just goes to show you can be a bright girl and a girlie-girl (although I’d caution her about that tanning).

Of course, the truth is that there is no proven correlation between the color of your hair and intellect.  A study was done evaluating the academic aptitude of students internationally and the highest overall scores were in Finland. I do believe Finland has its fair share of fair-haired kiddies.

You’ve got to watch out for those stereotypes and buying into them concerning others or yourself. It helps to have parents and teachers who focus on what’s going on inside your head instead of on top of it. And who encourage you to develop your intellect and talents and not just your makeup application skills.  Otherwise, you could end up like the little girls on Toddlers & Tiaras. 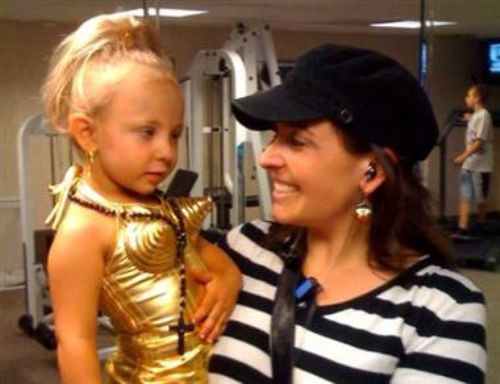