DJ at Heirs of Durin has posted the extensive article featuring quotes from all the principal BOTFA actors and several photos I haven’t seen before. Click on the link to see it:
http://thorinoakenshield.net/2014/11/28/empire-magazine-farewell-to-middle-earth-issue/#like-21067

He flies through the air with the greatest of ease. BTS photo of RA battling stuntmen in gimp suits representing orcs–from Empire Magazine.

OK, I confess. First thing, I always look for any quotes from and/or mention of RA in these stories. Then I read what it has to say about the other actors.

While I am at it, let me confess to something else: no offense meant to Evangeline Lilly or Orlando Bloom, but when I see previews of upcoming holiday films and their names, along with Martin and Sir Ian, are included amongst the stars of BOTFA in bold print–and Richard’s isn’t–I am major-league irritated. Call it Armitage Protection Mode if you well; call it the fact I have been miserably sick the last few days and am feeling more prickly than usual, but Thorin and the actor who plays him are simply more important to these films than those two are.  Martin as Bilbo may be the heart of the trilogy, but Richard as Thorin is the soul.  Thorin is described in the article as “the catalyst for conflict” for the final film.

The Empire writer, Ian Nathan also refers to Richard as the actor “arguably giving the performance of  the trilogy.” There is also a mention of how Armitage clearly loves “the dark juice of his character.” 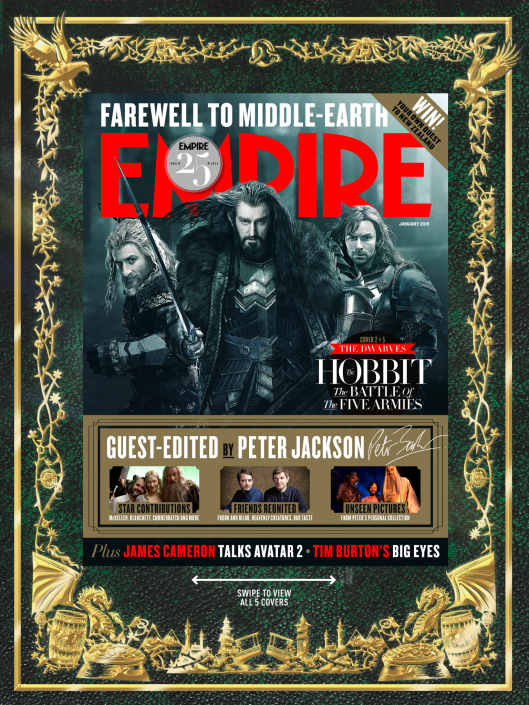 One of five covers for the December issue of Empire. I like it. 😀

And we all know he does dark and juicy well (Sir Guy is lounging in the corner, one saturnine brow raised and a smirk crossing his stubbled face. “Indeed,” The Dark, Juicy Knight purrs).

I am beginning to look forward to the film more than earlier–I have had conflicted feelings about the final film, and the need to say goodbye once more to a beloved, charismatic Richard Armitage character. I know that he will give a fantastic performance and I will need to get out the handkerchiefs. He may not receive a single award for all his hard work and artistry and commitment to the character, but it won’t be because he doesn’t deserve it.

And of course, just like Guy and Porter and Lucas and Proctor and any other of his characters who have “officially” shuffled off their mortal coils, Thorin will be So Not DEAD.

As Guy can tell you, it’s a pretty sweet deal.