“Ah, Ladywriter, it’s a special day tomorrow,”  Sir Guy said before taking an enthusiastic bite into a cinnamon raisin swirl bagel, generously smeared with brown sugar and cinnamon cream cheese spread. Not quite as good as one of those Cinnabon rolls, but pretty darned tasty.

Ladywriter took a sip of her coffee, which was generously laced with French vanilla liquid creamer.  Ladywriter has a tendency to trick things out.

“Yup. It’s–Groundhog Day. We’ll find out if we are going to have six more weeks of winter,” she said, looking at him through her lashes from over the rim of the over-sized mug.

Sir Guy, raising a skeptical brow, swallowed, giving LW an enticing glimpse of his bobbing Adam’s apple. Ladywriter loved watching Sir Guy eat. And since he could eat as much as he wanted and retain that lean, muscular physique (oh, the joys of being Loved into Being and So Not Dead!), she had ample opportunity to see that strong stubbled jaw in action . . . and never tired of it.

“I was not referring to that superstition about some furry creature seeing its shadow, Ladywriter.” The dark knight gave a manly sniff.

“You know what tomorrow is, my lady,” he added in a reproving tone, a glint in those kohl-rimmed eyes.

She smiled at him, a teasing smile, over the rim of her mug. “Doing research on the children’s book project, perhaps? We had a lovely meeting yesterday–”

Sir Guy gave an impatient toss to  his lustrous locks. “You may very well do some research and it may very well be Hedgehog Day–”

“Groundhog,” she gently corrected him.

Sir Guy folded his arms and gave her THAT look.

“Ladywriter . . ” His voice rumbled in that silken tone tinged with a note of warning.

She set down her mug and raising her hands, bowed her head with a sigh. “I beg your pardon and humbly submit defeat, Sir Guy. Tomorrow is, in fact, my first blogiversary.”

Sir Guy’s mouth curled into a smirk of satisfaction. “Exactly. What you would call, I suppose, a–milestone?”

LW looked up at him with a grin. “Yes, indeed. A year’s worth of discussing, exploring and celebrating the amazing CReAtor and his cast of ChaRActers.”

Sir Guy gave a slow nod as he tilted his dark head. “And how will you celebrate this festive occasion?”

Her grin broadened. “I suppose you’ll just have to wait and see, my dearest Sir Guy.”

He rolled his eyes and expelled a breath, cutting his eyes at her in a sidelong glance. “You know I do not like waiting.” “I will say this, Sir Guy. There could be–cake.” 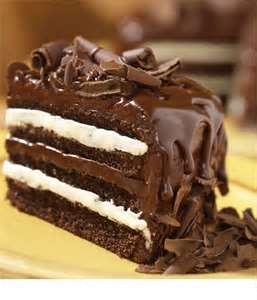 “What other kind is there, Sir Guy?”

Sir Guy’s lips curled into a smile almost as delicious as the mouth-watering slice of chocolate decadence he was envisioning.  “I am looking forward to that . . .”

Ladywriter heaved an inward sigh of relief. Thoughts of chocolate would drive thoughts of a certain vertically-challenged hairy hottie out of his mind for a while. She had work to do . . .