I am late in the day posting this, but I have in my own way been making merry with my dear hubby.  There was early morning snuggling, and then emptying our stockings and “oohing” and “aahing” over the contents, a mixture of the practical with the whimsical (dress socks, itty-bitty chocolate Santas, magazine subscriptions).  Breakfast was Italian sausage balls, grits and eggs; we watched Christmas-oriented movies and finally saw “Frozen” together. My voice is still dodgy, so I just waved my hands dramatically and lip-synched to the closing credits. Fun to be silly and a bit “kiddish,” and never a better time than Christmas!  And so I share some of the holiday-related fan art and photo edits I’ve done this year. May it give you a giggle. 😀 Merry Christmas, Happy Festivus, Merry Everything and Happy Always. 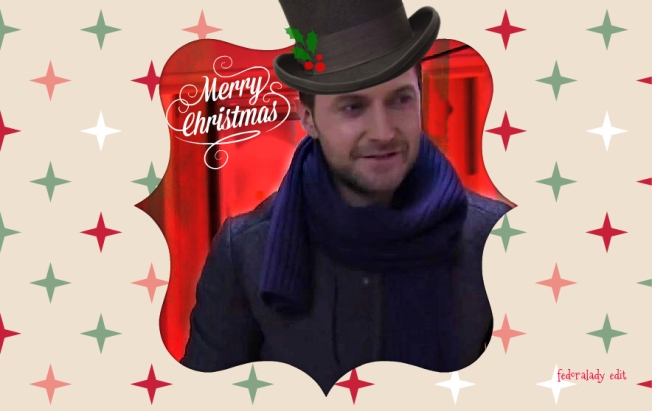 The boys after a little too much merrymaking during the press junket. 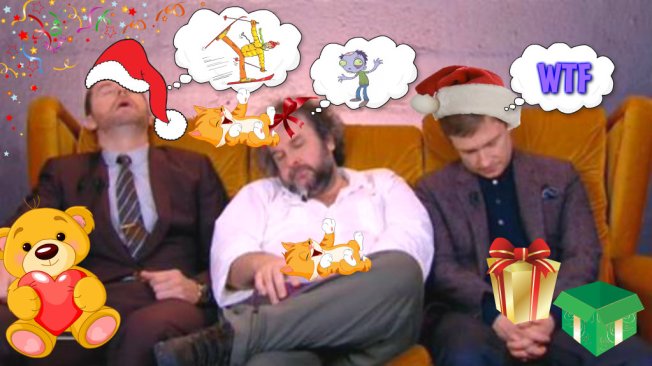 Visions of–well, not sugarplums dance in their heads.

Notice I didn’t tamper with the watermark; just having a bit o’ holiday fun.

And when he puckers those pretty lips . . . well, well, well.

Merry Christmas, Happy Holidays, and best wishes for a bright and beautiful New Year filled with good health, happiness and joy for the RA Community and for the “Founder of the Feast,” Mr. A!

I know it’s already Christmas Eve for some of my readers, with Christmas Day right around the corner. I wanted to go ahead and share some of the new Christmas photo edits I’ve been working on along with a few old faves, too. Merry, Merry Christmas to all and best wishes for a happy, healthy, productive, creative, love-filled 2014! (And there may be more fun stuff on the way . . . stay tuned!) Just keep scrollin’ ’cause there’s lots of goodies here . . . ho, ho, ho!! 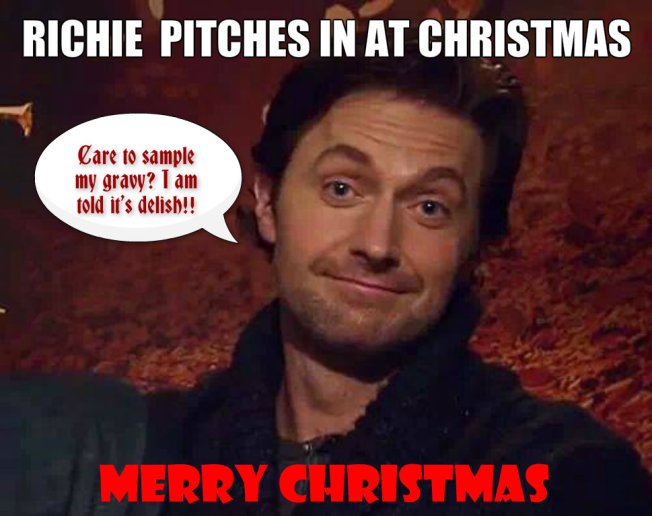 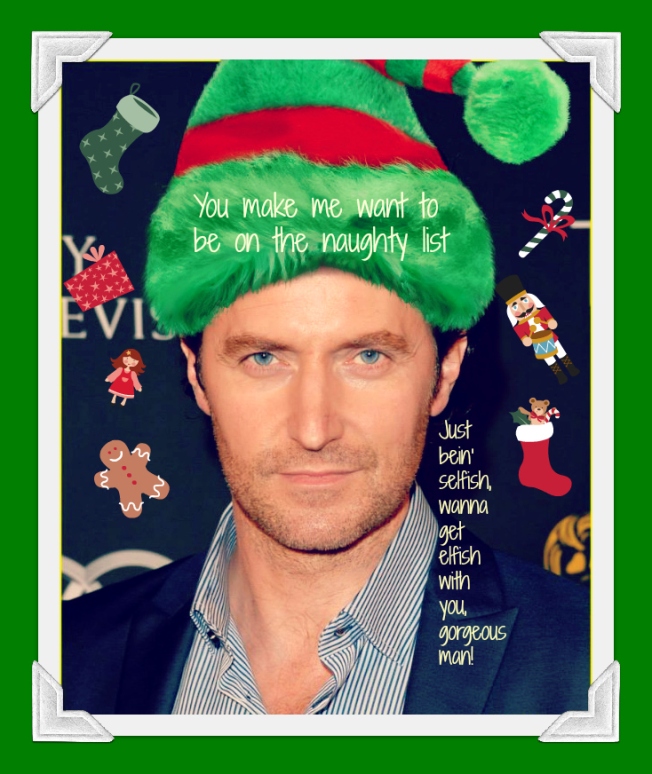 Technical expertise and the history of photography combine beautifully with pure appreciation of our lovely Richard in your posts, dear Guylty,making them pressies we can anticipate each week throughout the year. Because you, my friend, also love my creative endeavors in fan fic, especially that wild slashy NC-17 ride known as “Guy and Rebecca: The Adventures Continue” (which *ahem* can be found at Dreamer Fiction and Live Journal under fedoralady) I made these little photo edits with you in mind. Ho, ho, ho!!! 😉 I hope you will all enjoy these images . . . 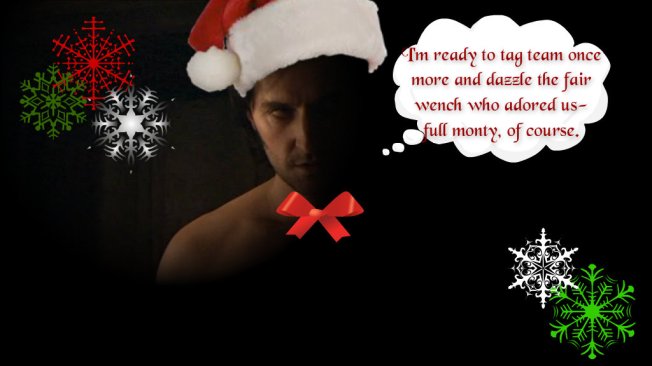 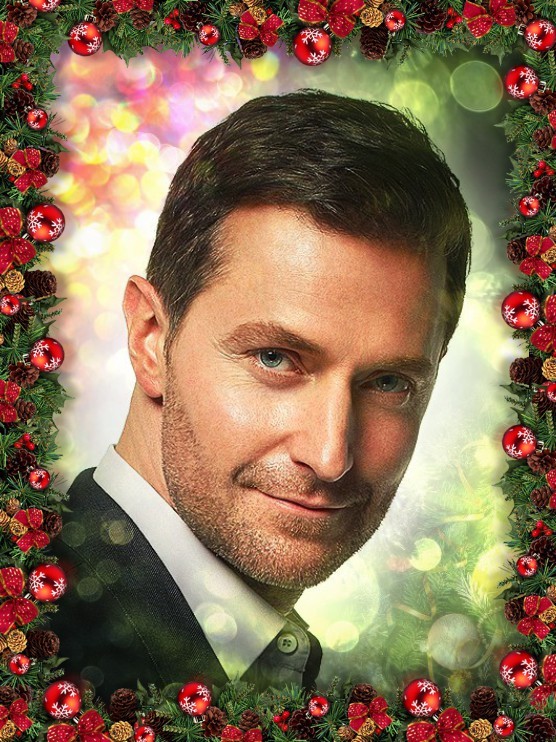 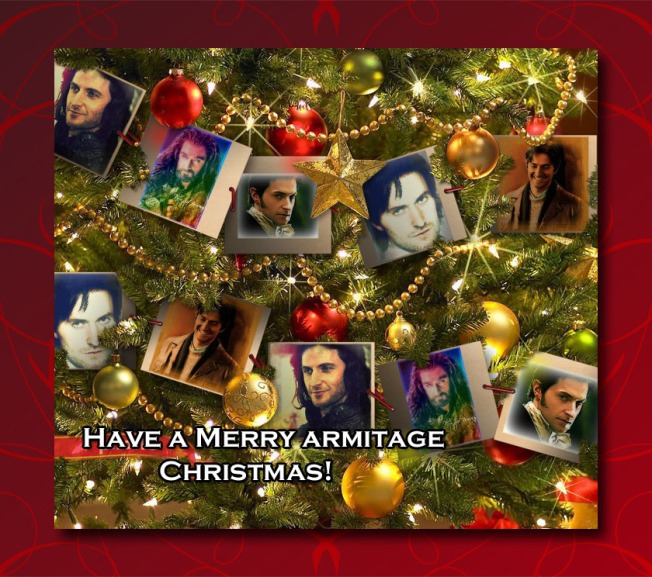 Someone up there must like me after all. We all know my Country High-Speed is not really too fast, and thus watching a live streaming event is mostly an aggravating chore for those of us out here in the Middle (of Nowhere) Earth.

Fortune has smiled on me in terms of the premieres, however. Whilst I missed portions of both the LA and Berlin events, when it was time for Richard to appear, lo–it WORKED! And with a decent quality picture and sound! How wonderful to see him and hear him speak from the lavish red carpet in Berlin tonight. The event felt very expansive–both in terms of the large amount of physical space allowed to hold it, and in terms of the liberal amount of time given for the actors to visit with fans along the way. Lots of autographs signed and photos snapped!  (Screencap courtesy of RA Bulgaria on FB) 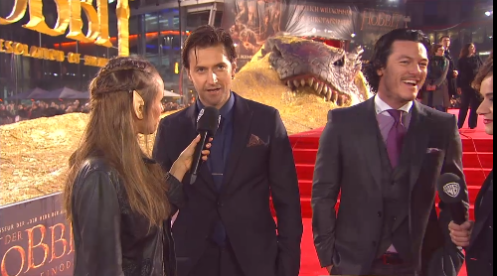 Now how about those elf ears! I loved this wonderfully fangurl-like touch on the red carpet. All screencaps unless otherwise noted courtesy of Servetus at Me + Richard Armitage.

Servetus has already voiced her delight with how well the event was managed in Berlin, and I can only second that. It was very fan-friendly AND actor-friendly. The interviewers seemed intelligent and knowledgeable and treated all with whom they came in contact on the red carpet with courtesy and respect. The actors definitely seemed to enjoy themselves with a natural rather than forced enthusiasm in the air.

Yes, I know film premieres are a much bigger deal in places like Berlin and Tokyo than in L.A. Still, I wish they could bring a little bit of that overseas dynamic to my home country for occasions such as this. Yes, I know premieres are plentiful in La-La Land; however, considering how much money the first film made and how much more moola this second film is likely to bring Warner Brothers, I just think they could, and should, do better  . . . 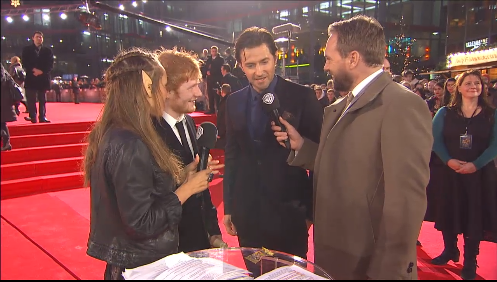 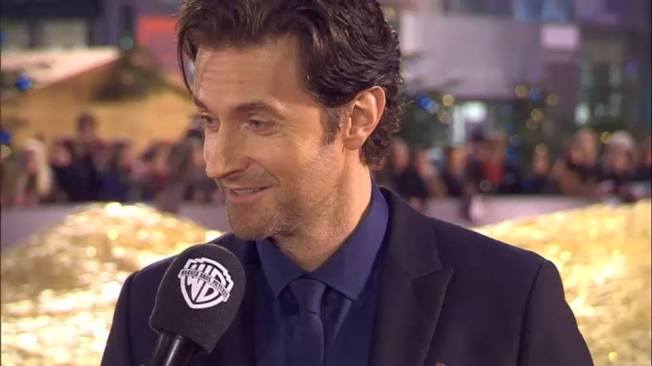 Note the single lock of longish hair brushing his forehead, the crinkles, the genial smile and the general air of bonhomie. I swear, Harry Kennedy, sporting a sharp suit and a bit of stubble, was peeking out tonight. And I LOVED it! 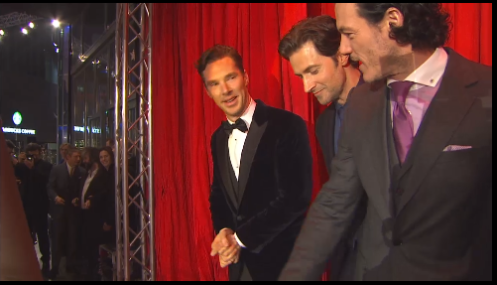