Ever since I first heard this song a few weeks ago as part of the soundtrack to an excellent 2009 Australian film In Her Skin I have been haunted by it. It’s a beautiful, powerful piece of music. (Sorry for the annoying ad at the beginning, but you can skip it after a few seconds.)

If I could buy the soundtrack I would, as there are several songs I really like, but it’s not available. I did purchase this particular song from iTunes and I suspect I will be making some sort of video set to it. The John Butler Trio is an Australian roots and jam band led by guitarist and vocalist John Butler. I will be listening to more of their music.

As for the film, it tells the true story of a 15-year-old  Melbourne girl named Rachel Barber who disappears one afternoon in 1999, leaving her family facing their worst nightmare.  Mr. and Mrs. Barber are determined  to find Rachel in spite of little initial assistance from the police, who assume she’s just another runaway teen. Great performances all around, including Guy Pearce and Miranda Otto as the concerned parents and Sam Neill as the divorced businessman and father of Caroline, Rachel’s former babysitter and neighbor. 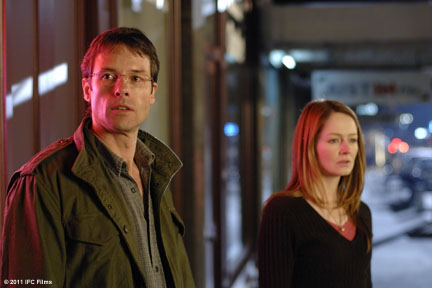 Guy Pearce and Miranda Otto as the Barbers searching the streets of Melbourne for their daughter.

Ruth Bradley is simply outstanding as Caroline, a deeply disturbed young woman who knows much more about what happened to the promising young ballet dancer than she will admit. Written and directed by Simone North, the film shows great respect for Rachel and her family as the story unfolds. I should stress it is not for the faint of heart.

At the end of the film we see the real Rachel’s photo and I found tears coming to my eyes. Apparently in the DVD extras Otto begins to tear up more than once while discussing Rachel, obviously impacted as well by her story. I saw the film on satellite and have ordered the DVD; it is also available through streaming video at Amazon and, I am guessing, Netflix and similar sites. If you enjoy true-life mysteries that stick close to the facts and a story offering strong performances and taunt psychological suspense, I highly recommend this film.

Ruth Bradley and Sam Neill in a scene from “In Her Skin.”