The individual whose remains were unearthed in a car park in September 2012 were confirmed this morning as being those of Richard III, the last Plantagenet King of England.

I, along with a number of fellow RA fans listened/watched BBC Leicester this morning to hear the presentation by the various individuals on their research results. Excitement seemed to build as they shared the details. Surely, surely all the evidence pointed to it being the slain king? 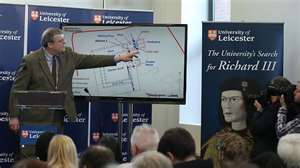 Finally the DNA evidence was given and the verdict shared: the body that had been in the shadow of Leicester Cathedral was the last Plantagenet.

Some of us cheered. Some of cried. I felt a chill down my spine.

Plans are for the monarch to be re-interred within the walls of the cathedral, in the shadows no more.  Tonight’s documentary will also include the full facial reconstruction that’s been done from the skull of the King to be compared with his portraits.

It appears Richard III’s appearance–the withered arm and the extreme deformity of his back–as seen in Shakespeare’s play and other writings were the fabrication some had imagined them to be.

“The wind of change is blowing,” said Phillipa Langley of the Richard III Society, saying it was now time to discover the truth about a king much maligned by political spin doctors and writers of the past.

“We have searched for Richard, and we have found him,” Langley, who has written a script about R III, said. “Now it is time to honour him.”

There are plans to re-inter the King in the cathedral no later than August 2014. White roses were placed there shortly after the announcement was made. And here’s a link to an article about Philippa Langley:

Now, we really need to hear from a certain Leicester lad . . .  surely he and his dad were watching/listening as the historic announcement was made? What thoughts were going through their heads?

It’s an exciting moment for Leicester and for England, that is for certain, and a special one for Richard Armitage fans and lovers of history around the world.