I have a case of the “can’t-help-its” this afternoon. Just not motivated to do much of anything but watch old movies on TCM and piddle around on the computer. Ate some gorgeous watermelon earlier–sweet, juicy, delicious and good for you! Speaking of such things . . . feast your eyes once again on the close-up goodness of Lucas early S9, complete with Porter muscles. Hope your Sunday is going/has gone well .. . 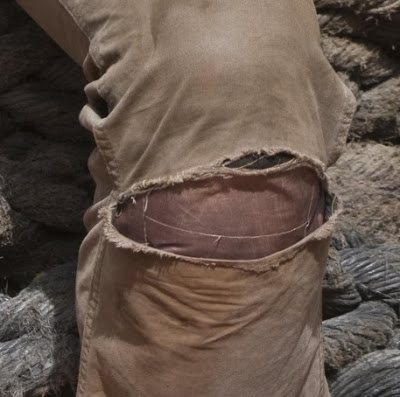 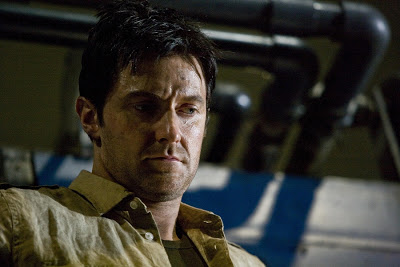 “Lady Writer,” she heard the deep, resonant rumble she loved so much. “You were asleep a very long time  . . .”

Lady Writer looked up into Sir Guy’s kohl-rimmed eyes and saw amusement mixed with concern reflected in that azure gaze of his.

He sat down on the bed beside her. Tilting his head as he flicked back a stray lock of that lustrous mane, Guy gave her one of those smiles. The sort of smile that made her heart beat a little faster.

“I thought perhaps I would have to revive you as the prince did in Sleeping Beauty. And also–Snow White, I believe?”

Lady Writer’s blue eyes widened behind her glasses. Damn, why did that stupid sound machine have to go and wake her up by cutting off? Waking up courtesy of Sir Guy would have been so much more enjoyable . . .

She saw a certain familiar gleam appear in those beautiful peepers of his.  “Ah, you find that notion not–unappealing?” Guy’s voice grew even deeper and huskier as he leaned towards her.

Lady Writer cleared her throat and straightened her pajama-clad shoulders. “Oh, I can think of worse ways to awake, I suppose,” she said with a deliberate nonchalance, which didn’t fool the ChaRActer Porter loved to call the Medieval Menace one little bit.

He raised one dark brow as  he folded those muscular arms across that equally muscular chest.    In spite of his penchant for Cheez-Its and fudgy brownies and Moo-llenuim Crunch Blue Bell ice cream, Sir Guy had stayed in remarkably good–erm–shape.

“And I would have been glad to make such a sacrific, milady.” He said with the utmost sincerity. Guy had perfected such lines from his years with the Treacherous Troll, when he had been forced to hear and speak a lot of bull.

He nodded with great solemnity. “Yes, a sacrifice I would gladly make in order to preserve something most cherished.”

“Why–Guyday Friday, of course! I could not let you sleep through that . . . t’would disappoint your readers all across the world.” He gave her one of those teasing boyish smiles that transformed his features. He did smile more often now that he was SND.

Lady Writer sighed. “I should never have mentioned  the fact you are the most popular character on the blog . . .”

His smile broadened into one of those irresistibly maddening grins as he wagged his long, elegant finger at her.  “You should never have made me privy to your passwords, Lady Writer. Or taught me all about the Internet. And reading and writing and . . .”

Lady Writer suddenly leaned forward and pressed a quick yet hearty kiss to Guy’s lips. Which are just as soft as you all have imagined. Sitting back, she giggled at the look of surprise on her dark knight’s face.

“Gotcha,” she said, the green and gold flecks in her own blue eyes dancing.  “Happy Guyday Friday, you big lug.”

Guy smirked and heaved a sigh, then lifted an imaginary glass.

“I  am continuing my studies of popular American culture of the 20th century, Lady Writer . . .” 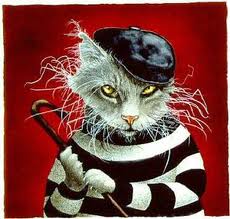 Lucas North in black ops outfit makes one think what a sexy cat burglar Mr. A would make.

Can’t you just see RA dressed from head to toe in black,that lithe body moving with the stealth and grace of a great dark feline, slipping in and out of the bedchambers of the wealthy to relieve them of their precious jewels? Wooing the gems (and other articles of attire) right off some unsuspecting and enamored female?

Yes, I’ve been watching Turner Classic Movies again. I cannot begin to tell you how much I love TCM with its uncut, commercial-free films from silents to great movies of more recent vintage. I am always discovering some new gem I have never seen and happily revisiting favorites. Thank you, Ted Turner.

Tonight I re-watched Alfred Hitchcock’s To Catch a Thief.  Set on the French Riveria in the mid 1950s, it offers witty dialogue, a romance complete with fireworks and plenty of pretty for the eyes:  gorgeous location scenery, gorgeous attire worn by gorgeous Grace Kelly, not to mention Cary Grant looking suave–and quite gorgeous– in a tux.  There is also a lavish masquerade ball sequence  with attendees in 18th century attire including an anachronistic gold lame gown that must be seen to be believed.

Cary plays  John Roby, a former trapeze artist turned jewel thief (“To my credit, I only stole from those who could afford it”). Roby has been paroled from prison for his service to the French resistance in WW II and grows grapes and flowers to earn his crust these days. Kelly is Frances, a spoiled, bored rich girl ( Frances’ mother: “I wish I hadn’t sent her to that finishing school. I think they did finish her off”) traveling with her delightfully down-to-earth mum.

A series of jewel thefts is taking place on the Riveria and the authorities are sure Roby, “The Cat,” is back in business. Grant has to prove his innocence while trying to avoid the police . . .

It’s a very enjoyable movie and yet again, I found myself casting Richard in the lead role–elegant, intelligent, crafty, alluring with an interesting back story. And he gets the girl and lives past the final credits. I think you can see the appeal I find in that.